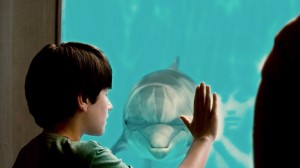 Eleven-year-old loner plus wounded critter equals movie tears in the affecting, if formulaic “Dolphin Tale.” “Family is forever,” preaches this PG-rated kids drama based on a 2005 incident in Florida. Sawyer’s (Nathan Gamble) dad left five years ago. Now his champ swimmer cousin Kyle (Austin Stowell) heads off to war somewhere, telling Sawyer the U.S. Army will pay for his Olympic training once his tour of duty is over. Meanwhile, the withdrawn kid with low grades bonds with a beached dolphin dubbed Winter. Instead of diagramming prepositions in summer school, Sawyer sneaks off to the Clearwater Marine Aquarium (“Rescue, Rehabilitate and Return”) to help Winter. A caring family of marine biologists at the facility—and an irascible pelican, Rufus—welcome him. Lacerated by the lines of a fisherman’s crab cage, Winter’s tail had to be amputated. Her new sideways stroke will damage her spine, however. Then Kyle comes home, disabled and bitter. Sawyer gets his VA prostheticist to donate his services and design a new tail for Winter. The mom of a little girl in a wheelchair drives eight hours from Atlanta to see the inspirational dolphin. Heartwarming saltwater sentiment ensues, from director Charles Martin Smith (“Air Bud”) and some of the producers of “The Blind Side.” Although no prayer is in the plot scripted by Karen Janszen and Noam Dromi, the production notes call the real dolphin’s turnaround a “miraculous recovery” thanks to “a groundbreaking miracle,” wording that slights the talents of prostheticists. With Harry Connick Jr., Ashley Judd, Cozi Zuehlsdorff, Kris Kristofferson, Morgan Freeman. 113m. (Bill Stamets)