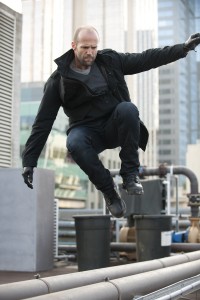 More comic than any of the identikit wisecracks in “The Killer Elite” would have been if this period story of retired OSS men at each others’ throats—kicked, punched and snarled through by Jason Statham, Robert DeNiro and Clive Owen—had kept the title of its source material, a book by Ranulph Fiennes called “The Feather Men.” The Feather Men! Then again, this dizzying assemblage of editing overkill is so murky in motivation, outcome and cinematography, that now vastly ironic title would crumple to a whimper almost instantly. A few of director Gary McKendry’s would-be iconic images are strong, like Statham’s gentle clenching-unclenching of his palm as blood congeals under the main title, but the restless editing seldom pauses. The dialogue has more lumps than fast-food oatmeal: “yer geezer”; “ah, yah horny git”; “g’wan, yah cheeky buggers”; “Well, it’s 5 o’clock somewhere, iddn’t it?”; “He’s your worst nightmare”; “War’s never over until both sides say it’s so” and the marvel, “C’mon, shit happens when you play the deep end of the pool, Danny.” And with much of the movie set at night, the projection at the press preview suffered from an increasingly common problem: dimness that suggests the video image is being projected from beneath the sea into a filthy cavern. All three of the leads keep their performances at seethe and simmer, and while the beauty of the kinetic potential of Statham’s compact form is underused, the soundtrack overcompensates with all manner of snap-crackle-and-KAPOW! Blood squibs splurp nicely amid desultory period settings those settings range from the deserts of Oman to Australia, Paris and London. While the pretensions of the film pale beside the period recreation and imaginative scale of the two “Mesrine” movies and Olivier Assayas’ “Carlos,” I can only say: John McTiernan, you are missed. 116m. (Ray Pride)