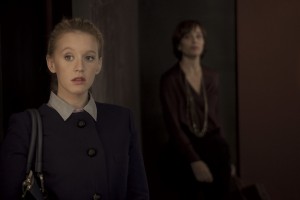 It’s Sphinx vs. Minx in the late Alain Corneau’s seventeenth feature, “Love Crime,” a cunning construct of what he knowingly described as one of “my little Fritz Lang labyrinths.” (Or  Brigitte vs. Bordeaux?) Corneau pits two career women in the Paris office of an American agricultural conglomerate against each other: chilly mentor Christine (Kristin Scott Thomas), impressionable protégé Isabelle (Ludivine Sagnier). Barney & Johnson: it sounds like a couple of dogs George W. Bush would take for a walk. But this “agro” industry has its own form of “aggro.” “Want it and watch out at all times,” is Christine’s advice to the talented younger woman. “You’re both very complicated,” is all a co-worker who sleeps with both women can muster. Isabelle seems like a tightly packaged little girl waiting to uncoil: first sex, ripping away her business-suit pencil skirt, clumsy tearing at her tight corporate carapace, suggests she needs to shed control as well. “It isn’t luck when you do the work, things fall into place,” Christine says after taking credit for one of Isabelle’s best business proposals yet. It’s not all city cat, country mouse: the range of expressions that flicker across the features of these two dissimilar, yet equally vital performers’ faces are unspoken worlds. But they also act, tellingly, with their bodies: posture, sudden eye contact, suddenness. A twitch of the mouth, a flex of the arch of a foot. They’re delicious in the midst of encroaching paranoia. Notably, they’re wielders of fountain pens, each pointing a nib like a small deadly blade. Isabelle, given a file that could crush Christine, pushes a bold red presentation binder away from herself on a desk as if it were radioactive. And the gesture of rubbing the corner of the mouth of another is as deadly as a punch or a stab. You better flinch. “This is the right person in the right place at the right time”: when the complications come, and come, and come again, and again, you’ll know that’s the story’s truest line. The score, for saxophone and koto, by American musician Pharoah Sanders, is unexpected: exotic, tender and unaccountably fearful. (There is a splendid fateful moment where a wordless ballet suddenly welcomes the koto, played out as if on a Japanese stage.) Corneau’s best-known film may have been the music drama about the life of a seventeenth-century viola da gamba virtuoso “Tous les Matins du Monde,” but most of his films were crime thrillers on par with “Love Crime.” With Patrick Mille, Guillaume Marquet, Gérald Laroche, Julien Rochefort, Olivier Rabourdin. 106m. (Ray Pride)