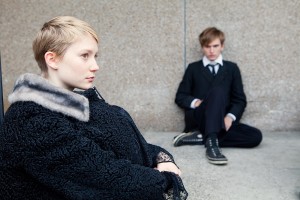 “Restless” tempts the credit “Based upon the perfume strip of the same name,” or at the very least, “As Seen In Paper magazine.” Gus Van Sant’s adaptation of a play by Jason Lew, a college colleague of co-producer Bryce Dallas Howard, is modest. It’s a doodle: the story of the dying Annabel Cotton and the angry Enoch Brae would be a fumble-tumble of “Harold & Maude”‘s cutesiness and “Love Story”‘s weepy fatedness if not for Van Sant actually taking a good, tender look at the duo in front of him. (This go-round, he’s channeling Ryan McGinley instead of Béla Tarr, postures rather than camera figures.) If only “Restless” were a silent film, lavishing long looks at their fantastic faces, accompanied by swells of music and distant sound effects. (They speeeeeeeak.) Their faces are studies when in repose: Henry Hopper (son of Dennis) is a wheaten wisp of his father’s raven angularity; Mia Wasikowska, with a Mia Farrow pixie cut, is a charismatic wide-eyed dreamer, not so much embodying innocents as the tinglingly observant, a live-wire near-feral presence in films like “The Kids Are All Right” and “Jane Eyre.” With the exclamation, “Naturalist. I’m a naturalist,” her face gently suffuses with dimple—it’s an exquisite combination of verbal and physical intonation. In motion, Hopper’s awestruck dark eyes behind hawk-sharp cheekbones, dandled by straw bangs, make you wish he’d just stay still, bound in his Jack Skellington-pinched black waistcoats and tailcoats. Even obsessed with the funerals of strangers, he’s hardly death’s hipster-headed angel. Otherwise, “Restless” is pre-Goth prehensile-sexuality romanticism, a slow slop to twee-mo. (“What is it about girls and horses?” is asked, then answered.) Then there’s the kamikaze imaginary friend who kills it for everyone, especially Enoch, who always loses games of “Battleship” to the ghost. “We have so little time to say any of the things we mean. We have so little time for any of it.” Preach it, Hiroshi! “Restless” is the sixth film Harris Savides (“Somewhere,” “Zodiac,” “Greenberg”) has shot for Van Sant, and its mist, dusk and damp breathes the gentle chill of Portland in autumn. The soundtrack needle-drops include the Beatles, Sufjan Stevens and a completely unlikely yet magisterial final long take of a face fumbling for language accompanied by Nico’s yearning. So wrong. So very right. Danny Elfman’s score keeps away from his customary calliope styling, although a toy xylophone tumbles past. With Schuyler Fisk, Jane Adams and the honey-throated nicotine purr of Lusia Strus. 95m. (Ray Pride)