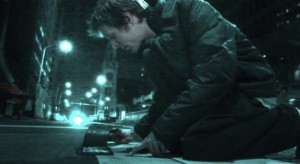 Jon Foy’s “Resurrect Dead: The Mystery of the Toynbee Tiles” is a ten-years-in-the-making amalgam-cum-hybrid documentary that would sit as nicely in the 1970s as it does in the present moment. A nicely anachronistic conspiratorial air lurks in the film’s pursuit of “The Toynbee Tiles,” unsigned handcrafted slabs of art, asphalt and linoleum mosaics, that have been embedded in streets around the country. Philadelphia resident artist and musician Justin Duerr may be the most enthusiastic of Foy’s figures in pursuit of these strange, cracked artifacts, each with the message, “Toynbee Idea/In Kubrick’s 2001/Resurrect Dead/On Planet Jupiter.” From those few words, Foy and his amateur detectives follow leads that run from Chile to Larry King to a David Mamet one-act. The story, inevitably, becomes as much about dogged pursuit as it does pat solution. The forceful aspect of the filmmaking is the deft juggling of tense, of testimony and surmise and recreation: potential realities swirl rather than collide. Foy won the 2011 Sundance documentary directing prize; executive producer Doug Block (“51 Birch Street”) was instrumental in guiding this strange and compelling film to the festival, and to distribution. 88m. (Ray Pride)

“Resurrect Dead: The Mystery of the Toynbee Tiles” opens Friday at Facets. A trailer is below.