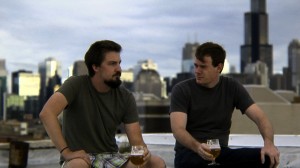 That’s as simple as a movie gets outside of landscape studies and outright porn these days, and it comprises much of the dramatis personae of Adam Wingard and Joe Swanberg’s four-episode sex-on-the-West-Side-of-Chicago sketch film “Autoerotic.” The opening shot, of Wingard negotiating with a woman with striped panties to get her just so in the cell-phone video frame for a spanking, begs the question of the right format to watch a frank (but not pornographic) seventy-minute movie like this. On an iPhone screen the size of the first screen we see? Streaming on a laptop? On DVD? Projected on a big, THX-certified theater screen this week at Siskel?

Between dusk Sunday and dawn Monday, Netflix’s boss made that question even more compelling, and more than in terms of this single movie. But first, “Autoerotic.” Swanberg has a modest advantage over other young filmmakers with an ongoing distribution relationship with IFC, which puts much of its output onto cable pay-per-view systems, allowing them to stint on theatrical distribution costs, television and newspaper advertising. Magnolia Pictures, owned by the same company that owns Landmark Theatres, does similarly, and other concerns, including Focus Features and The Weinstein Company, are making pay-per-view an important part of their future. (“Autoerotic” also suits the urban legend that an ideal pay-per-view title starts as far up the alphabet as possible, so as not to get lost in endless onscreen selection menus.)

Before the markets opened on Monday, with its stock price pancaking from raising its rates last week, Netflix made a bold move to jack it back up. The company’s CEO Reed Hastings announced in an odd, apologetic email, and a strange video by a swimming pool, streaming video would remain Netflix, while a separate company called “Qwikster” will service those who still want DVDs by mail. (But you’ll still get red envelopes, he reassures.)

One surmise, from Fast Company magazine, is that it’s easier and less expensive to close an entire company than a division. “Liabilities are easier to manage. It makes managing public relations more simple as Netflix would not have to show losses or firings from the parent company. Tax challenges can be averted.”

So it’s about survival? The worst first reactions come from IndieWire’s editor-in-chief, Dana Harris, who reports, “I’ve already heard from some indie filmmakers complaining that not only is Netflix (sorry, Qwikster) not renewing their DVD deals, it’s not looking to make their films available via streaming. Their movies are no longer necessary to the Netflix or Qwikster business models.” That’s where the chill sets in, but it’s been in place all along, if we go by what producer Mynette Louie (“Children of Invention”) tweeted overnight, “Met Reed Hastings in ’99, even then said DVD biz was just way to build cust base for streaming.”

What about my needs! But more importantly, what about a quiet, seemingly naturalistic movie like “Autoerotic” and filmmakers like Swanberg and Wingard? And the next generation? Man does not live by 3-D resissues of “The Lion King” alone. These two filmmakers are already in the swim: Swanberg’s got several features in the can, and Wingard’s home-invasion horror movie “You’re Next” debuted to proper shrieks last week at Toronto International’s Midnight Madness. (It hasn’t sold, but it’s expected to soon.) They’ll do fine. For now. But what’s the next corporate whim or lunge?

It’s modest; it doesn’t even have dozens of dollars behind its promotion. It’s a glimpse of an unfixed, slightly creepy, slightly unstable city of lights and shadows and silhouettes and frustrations and fixations and obsessions and… stories. And now, with Netflix’s public bursts of strange enthusiasm, we have to consider, more than ever, not just how stories are told, but how they’re sold.

“Autoerotic” opens Friday at Siskel. Swanberg will appear Saturday, Wednesday and Thursday. Hasting’s mea culpa video is below. UPDATE: Lionsgate bought “You’re Next” on September 21; Swanberg announced four of his upcoming features will be released by an annual subscription model.