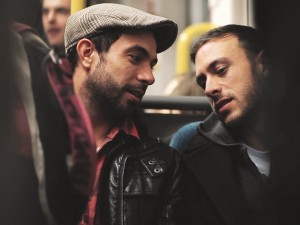 What do people want? Andrew Haigh’s understated “Weekend,” set in Nottingham, England and shot less than a year ago, is an affectionate chamber drama about the opening-out across several days of a possible relationship after a one-night stand. After dinner with straight friends, Russell (Tom Cullen) ambles into the night, where he meets another man, Glen (Chris New). The audience shares their tentative discovery of each other: Haigh’s dialogue in his latter-day “Briefs Encounter” is matched by the skills of Cullen and New: it’s the most affecting two-hander romance since “Before Sunset.”  Romance: little more, nothing less. This is the gift of the moment’s understated, deceptively small-scale movies and certainly of this lovely, observant story: life and nothing but. It’s a chamber drama, but there are scenes that encompass the small city around them. There are glancing references to the larger culture, including a “Notting Hill” joke, but there’s ordinariness, messiness, quotidian simplicity in how this pair come to meet and provoke each other. Wow—this could happen? It seems neither expect such fortune. There’s a passing resemblance to Travis Mathews’ sexually explicit short, “I Want Your Love,” which moves from nervousness to laughter to sex to disenchantment between two friends, and a scene near the end of “Weekend,” a parting at a train station shot with a slow zoom, evokes the end of Ron Peck’s 1978, “Nighthawks,” where a character’s repetition-compulsion hits a grubby dance floor once more. But Haigh’s present-tense tale rings true, and true to itself, at every turn, in most every word, a universal love story. (Yet it’s still very English.) Longing: when do you see that, feel that, in the commonplace romantic comedy? And intimacy, demonstrated like this? It ought to be simple, shouldn’t it? “Weekend” is easy: a beautifully structured, seductive, emotional revelation. Haigh’s background is as an editor, and his sense of pace and his preference for extended takes in restless master shots reflect that. His credits include first assistant editor on Harmony Korine’s ” Mister Lonely,” as well as assistant editor on two films by Ridley Scott, “Kingdom of Heaven” 2005; and “Black Hawk Down” (2001), as well as an apprentice on “Gladiator” (2000).   “Weekend” won the Emerging Visions award at its premiere at South by Southwest. 96m. (Ray Pride)