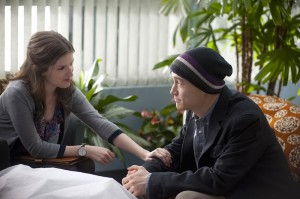 Stuff of tragedy? Stuff of comedy? It’s the stuff of the superb third feature by Jonathan Levine (“The Wackness”), bearing probably as marketable a title as could be found for a based-on-life screenplay that began life as “I’m With Cancer.” The inspiration for this fairytale with the fiercest of monsters came from screenwriter Will Reiser, a friend of Rogen who faced similar odds several years ago, and who wrote up, embellished, improved upon the painful situations. Of the collaboration, Rogen says that he, Reiser, Rogen’s writing partner Evan Goldberg and Levine were involved all the way through rewrites and shooting and the rewriting that film editing ought to be.

As a director, Levine’s got entertainer’s instincts, and the best kind. The opening thirty shots or so under the main credits are cocksure and witty, a lesson in economically conveying narrative. The choices give a sense of the city and how Adam moves in it, but also characterization. He’s on a run, but checks his watch intermittently: impatient and soon to discover time may not be on his side. It’s not the stuff of literature: it’s visual filmmaking at its most unpretentious. Then he’s at his cubicle before he even knows he’s ill, editing audio at his desk, red waveforms undulant in front of him. It’s a sly preamble to the medical tech that will treat Adam intermittently for the rest of the story. Modest flourishes like this enrich the film, even in broader strokes, such as in the comic way therapist Katherine is a messy dork—when we first meet her, we see her computer with the screensaver, “Katie’s Laptop” (cringe, then melt)—versus Adam’s compulsive neat-making. Control freak loses control, demonstrated through behavior and gags. Kendrick’s performance is softer, gentler than her petite exclamation point of a corporate striver in “Up in the Air.” There’s a moment where she’s alone on the phone, listening to Adam, and he blurts something more meaningful than he should, and her reaction, a quicksilver composite of flinch, flutter and melt, is as bracing as a slap (but in a marvelous way).

All these attributes give “50/50” the shape of a movie-movie, but it also returns when necessary to the shape of experience. The jokes are plentiful, Gordon-Levitt is unimpeachable, as usual, at both comedy and drama, and I can’t remember a movie without babies that involves so much touching. The biggest “touch” may be the judiciously parceled bits with Huston, who bursts out with a lifetime in a single line’s delivery: “I want you to know I smother him because I love him.” It’s a laugh, a bark-laugh, but for all the right reasons.

One of the best indicators of how at-wit’s-end the two friends become is the extensive swearing, casual as it comes, which is usually only at this dosage in Canadian movies: U.S. movies seem to carefully measure out every occurrence of profanity. There’s a lot of fucking swearing, I say. “Canadians swear a lot,” Rogen tells me, laughing generously. “We’re very polite but there’s a lot of swearing. That doesn’t get you an R rating in Canada. I don’t think ‘Superbad’ was rated R in Canada. I think it was rated 14A or whatever the hell it is.” But it’s gratifying in a way, since in the average non-indie movie, profanity is a projectile or a diagram, like, “Oh, we get a C word, two shits, a motherfucker and a fuck you,” I say. “We like to do a blanket layer of swearing throughout the entire movie. It’s funny, I was in a meeting with the president of one of the major studios recently and he was taking great pride in the fact that he personally counted the amount of swear words in a script that me and Evan were rewriting for him. We were, this is not a good approach to this, in our opinion! If you’re gonna say ‘fuck’ twice, you might as well say it five-hundred-thousand times, because it almost makes it less impactful the more you say it, not more impactful. But! That’s the way we talked, and that’s where it comes from. I don’t even notice it at this point, honestly, it’s so casual. We tried to get versions for commercials or marketing or TV, where we do a take without swearing, and inevitably, it gets ruined by me saying something horrible without even realizing. ‘What? What was wrong with that?’ You said, ‘Suck my cock!'”

The ending is open-ended, Cameron Crowe-larky-scary, just right. Rogen says it came through reshoots. “In watching the ending, we really realized that it needed to be much more powerful. And there were a lot of elements, his wig was really fucked up when we first shot, he literally didn’t look better, he looked weird! It was a hard balance to find, and we literally had to watch the entire movie to the end, and think, ‘How do you want this to end?'”

Rogen nods and chuckles at his friend. “Most importantly, he’s not fucking dead!”