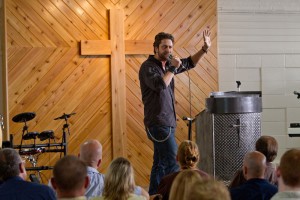 “You quit stripping to fucking pack fucking mushrooms?” sputters an incredulous Sam Childers (Gerard Butler, “300”). On his first day out of prison, this Pennsylvania biker, doper and gun-lover gets the news that his wife is no longer employed at the Bunny Hole: she’s a Christian now. The lowlife father of her little daughter is soon dunked at her Pentecostal church, starts a roofing and construction company, and builds his own church. On a do-gooder trip to Northern Uganda, he sees a local woman rushed into an NGO clinic. “She argued with rebels so they cut off her lips,” he’s told. “I found God in 1992, but I found Satan in 1998 in Sudan,” states the real Childers, who wrote “Another Man’s War: The True Story of One Man’s Battle to Save the Children of Sudan,” worked with first-time screenwriter Jason Keller, and gets the last word via video clips in the end credits. By “Satan,” Childers means Joseph Kony, leader of the Lord’s Resistance Army. Killing Kony would fix things in those parts, figures the unquestioned Old Testament logic of this Christian action biopic. Director Marc Forster displays none of the cultural acuity of “Kite Runner” or the moral wit of “Stranger Than Fiction.” Faith and filmmaking are equally simple as Childers starts an orphanage near the front lines of a civil war (now altered by the founding of the state of South Sudan). Childers sells off his company back home to do more good. What’s that “machine gun” doing in the title? That’s how Childers smites the evildoers of East Africa. Forster and Keller ignore the geopolitical landscape and their hero’s psychic interior. One sign of originality is an ill-conceived tactic of cross-cutting that misfires at every turn. With Michelle Monaghan, Michael Shannon, Souleymane Sy Savane, Madeline Carroll, Kathy Baker, Junior Magale. 123m. (Bill Stamets)