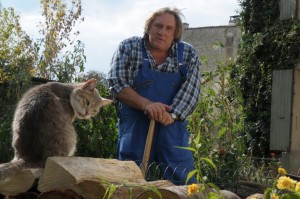 Gérard Depardieu is epic of heft if not tragic of proportion in “My Afternoons With Margueritte,” (La tête en friche), a jeroboam of Francophile frippery, more Merlot than melodrama. Germain, an uneducated side of beef living out his days as a village handyman, meets a 95-year-old woman, Margueritte (Gisèle Casadesus), who also loves pigeons but urges her lifetime of reading onto the simple one. Germain lives across a garden from his hateful mother, to whom Margueritte (a misspelled name she attributes to her father) acts as a convenient maternal substitute. Middlebrow compassion plays out in pleasantly generic form, but even vamping, the big man doesn’t piss away his charisma: Depardieu may be one of the cinema’s most watchable galoots even when his character is trying to literally visualize passages from Camus’ “The Plague.” Veteran director Jean Becker directs with a heavy weight on the butter knife, yet the calories fall surprisingly lightly. (A public urination scene is a momentary reminder of Depardieu’s recent airborne embarrassment.) Based on Marie-Sabine Roger’s novel. With Sophie Guillemin, Claire Maurier, Jean-François Stévenin, Mélanie Bernier, François-Xavier Demaison. 88m. (Ray Pride)

“My Afternoons With Margueritte” opens Friday at Landmark Century and Landmark Renaissance.