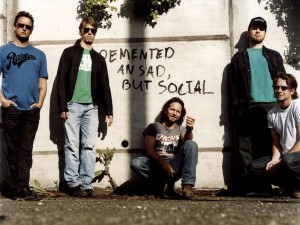 Too easy to just say fans will love this. It’s for them. But what more is there to pry or spoon from “Pearl Jam Twenty”? Former teen rock journalist Cameron Crowe’s scrapbook of concert clips, off-stage vérité and friendly interviews is entertaining enough for non-fans. The writer-director comes off as a longtime friend of the band, not a first-time documentarian expanding his repertoire. Ironically, the most confusing part is when Crowe cites “Singles,” his 1992 romantic comedy shot and set in the very place where the likable band started. Launched in Seattle a couple decades ago, Pearl Jam’s members came from such groups as Deranged Diction and Ducky Boys. (Singer Eddie Vedder was born in Evanston.) For a minute or two, he touches on some father issues that made their way into his early songs. As for musicianship, there’s a half-minute rundown when each band member points out his favorite formative seventies rocker. Grunge gets a glance with no critics or cultural-studies commentators to frame that scene, except to say it got commercialized. You realize at the end that you know next to nothing about the band. One member saves memorabilia. Another does not. It looks like two of them may have a kid. That’s it. What they do when not recording or touring is not of interest to Crowe. Their romances and real estate are irrelevant. Covering the public stuff is hard enough for him. The band’s critique of Ticketmaster is badly reported here. The fans who appear on screen can count all the shows they attended. They really don’t get to say why. 119m. (Bill Stamets)