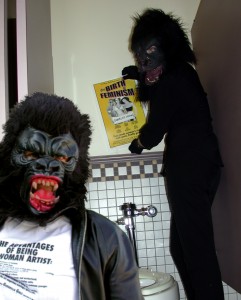 Writer-director-shooter-editor Lynn Hershman Leeson draws from almost forty years of her own observation (and filming) of makers of feminist art to compile her personal secret history since the 1960s, the genial overview that is “!Women Art Revolution.” Less interested in critique than in celebration via talking heads, Leeson, whose films include at least three collaborations with Tilda Swinton—”Strange Culture,” “Conceiving Ada,” and “Teknolust”—covers a lot of ground. The roster of figures, which calls out more for the luxury of a Ken Burns-style extended treatment than a dense, sometimes baggy feature like this, includes Miranda July, Judy Chicago, B. Ruby Rich, Rachel Rosenthal, Dr. Amelia Jones, Martha Wilson, Faith Ringgold, Judith Baca, Miriam Schapiro, Hannah Wilke, Eleanor Antin, Nancy Spero and the Guerrilla Girls. (The battle over Judy Chicago’s “Dinner Party” prompts a glimpse of politicians scoring points from obstinacy and ignorance.) The strong score is by Carrie Brownstein (Sleater-Kinney, Wild Flag); it’s a plus in a documentary that draws from so many anachronistic visual formats. 83m.  (Ray Pride)

“!Women Art Revolution” opens Friday at Siskel. A trailer is below.