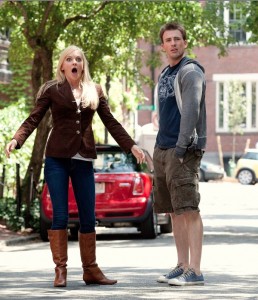 When in Rom… In Anna Faris’ first film as star and co-producer, “What’s Your Number,” she’s intermittently adorable but she’s in a patchy, baggy misfire. (Hearing Faris say the too-twee “adorbs” with her deadpan kitten affect would be almost as fine as the many-yet-too-few “What. The. Fuck.”‘s with which she drops anchor.) One of the articles of faith to demonstrate that the cinema is a godless art is the profligate waste of a fount of inspiration like Faris. While she’s dead center in most every one of the script’s sketches, she can’t breathe air into its deadly contrivances. There are bridesmaids, but it’s no “Bridesmaids.” The production goes beyond trying to make her a latter-day Goldie Hawn, a ditz of steel—the camera’s idolatrous, even. Freshly fired, Boston marketing drone “Ally Darling” reads a Marie Claire article on the train about the maximum number of partners the marriageable woman ought to have had. (She’s also broken up with her latest boyfriend under the credits; he took offense after she said, “It felt serious last night when you were doing me from behind, but I couldn’t see your face.”) While her “Smiley Face” character’s marijuana overdose is her most sustained performance, Faris ought to be freed to embody the luminous rube with grace, champeen gawping and occasional falls over the stray footstool. Through much of the story, smashed, barelegged and barefoot, given to an unreflective chortle, Ally is only comic potential in waiting. In a continually revised state of dishabille, Faris darts around pantsless in boyfriend shirts, flip-flops, crop tees, frilly if decidedly minimalist panties and, at her best—in a slit-at-the-hip crimson sheath, yes, barelegged, yes, barefoot—she brandishes megapetitie swagger. She falls down more times than Lucille Ball, but less often than a Preston Sturges hero. Faris’ burr of a purr perks up the ears once in a while, embroidering lines like “I don’t get bangs” and “I’m just—tasting—some cake”; “I’m running out of time, money and viable eggs,” and “He recognized my vagina!” But the fistful of inspired non-sequiturs is strewn improvidently: how can you toss off “I’m a jobless whore who’s slept with twenty guys and all I want is for someone to appreciate me for that”? The camera gets busy, admires the bright color schemes, we see Facebook, Google, iPhones, we yawn, awaiting her next “What. The. Fuck.” Some of the jokes in a chase montage across Boston to New Order’s “Bizarre Love Triangle” almost save the day, but too little, too lame. Standard romcom batshit already rules the roost. Mark Mylod directed from a screenplay by Gabrielle Allan and Jennifer Crittenden, based on the book “20 Times a Lady” by Karyn Bosnak. With Chris Evans, Blythe Danner, Ed Begley, Jr., Andy Samberg, Joel McHale, Ari Graynor, Dave Annable, Zachary Quinto, Ryan Phillippe, Mike Vogel, Chris Pratt. 106m. (Ray Pride)

“What’s Your Number?” is now playing.