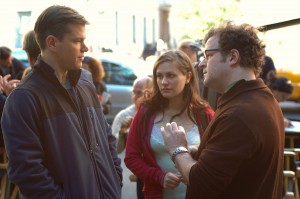 “RIP: ‘Margaret’ 2003-2011.” A curtailed potential masterpiece: six years of legal wrangling over running time have kept Kenneth Lonergan’s drenching study of a seventeen-year-old New Yorker’s inner life in the years immediately after 9/11 from being seen. Lonergan’s follow-up to 2001’s “You Can Count On Me” is a straightforward yet lovingly structured examination of heated, sometimes-hysterical post-9/11 emotions, written in 2003, shot in 2005, locked and copyrighted in 2008, litigated unto now—perhaps at the crest of a five-year business write-off cycle?—and released in an inexcusably truncated form.Other cuts of “Margaret” languish somewhere in a vault, including one by Martin Scorsese and his editor Thelma Schoonmaker, in what may well be the form of a finished film, which this is not. Even with two substantial, even necessary, subplots extracted from the 184-page 2003 script (which has circulated since the film’s postproduction agonies ensued), “Margaret” is a frayed-nerves feat of furious articulation. Lisa Cohen (Anna Paquin) is a privileged young woman whose confusions run from mother to father, to sex, to the life of the mind, to elemental guilt. Thematically, “survivor guilt” after 9/11 resounds in Lisa’s witness to, and potential cause of, the death of a woman who’s hit by a city bus. The profusion of life, of life in Manhattan post-9/11, of life in the mind of a privileged, self-aware seventeen-year-old schoolgirl, of life that eddies around her in all directions, is novelistic in ambition, Dickensian in its welter of broken legalisms. It’s “Bleak Island.” Everyone feels insane. All the characters are at loose ends. Several even say to each other, “You sound insane.” Paquin offers a bravura performance—shrill, feral, emphatic, self-dramatizing, self-cautioning, self-aware, self-immolating—that is like nothing I’ve ever seen. She’s in Lisa’s skin and it’s an uncomfortable place. There’s a repeated fugue of an interlude, with figures on the city’s sidewalks shown in extreme slow-motion, seemingly random faces, and with Ryszard Lenczewski’s cinematography tending to the shadow-bruised, the ashen, a shaft of light will suddenly pick someone out in the deep distance, their faces illumined in full proper focus for a brief instant. This, too, is Lonergan’s dramatic impulse: where will the story spiral? How are we all meshed together? A book could be written about how a film like this was made and unmade, and it ought to be. Like its central character, “Margaret” needs only to weep in its mother’s arms, or in this case, its long-suffering father. The intriguing score is by Nico Muhly. With a uniformly superb cast of J. Smith-Cameron, Jeannie Berlin, Allison Janney, Matthew Broderick, Kieran Culkin, Mark Ruffalo, Matt Damon. One last indication of how long it took to unmake “Margaret”: two of the film’s key producers, Anthony Minghella and Sydney Pollack, died within months of each other in 2008, the year of  “Margaret”‘s copyright. 149m. (Ray Pride)