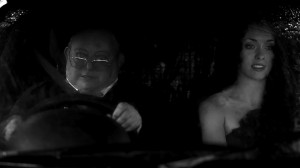 In “Human Centipede 2 (Full Sequence),” Tom Six reprises his 2009 horror film by adding “2” to the title while multiplying the victims by a factor of four. Instead of sequencing three naked people on their knees with pieholes stitched to assholes, this time there are twelve people stapled together. Why? To model a “human centipede” with a pass-through tract: ingestion- digestion-excretion-ingestion… repeat ad nauseam. The stylish, savvy surgeon in the first film is here replaced by an obese, abused, mentally challenged fanboy who obsessively watches the original “Human Centipede” on a laptop and masturbates during the night shift at a London parking structure. Shot in oily black-and-white, this version is arguably better for its bravado, if only for casting one Laurence R. Harvey as Martin, a metastasized spectre of Peter Lorre, if Fritz Lang remade “M” as noir gore. High-angle shots gleefully frame this mute, sweaty, bespectacled grotesque. His untreated pre-existing condition is telegraphed in audio flashbacks by his taunting father: “Stop your tears. You’re just making daddy’s willie harder.” After the British Board of Film Classification nixed UK exhibition by opting not to rate this wretch bait, Six’s reported salvo was: “It is all fictional. Not real… It is art.” If that’s the director’s best shot at rebutting an obscenity rap, I’d suggest grafting two, maybe eleven, heads to his own. With Ashlynn Yennie, Bill Hutchens, Vivien Bridson. 88m. (While unrated, cuts were made for U.S. distribution, including a rape scene involving barbed wire and sandpaper.) (Bill Stamets)