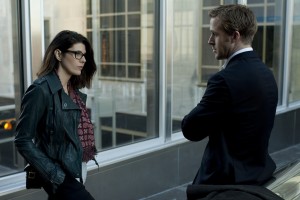 George Clooney’s fourth feature debuted at Toronto, where a fair grumbling scrum of reviewers called it “cliché,” found its backstairs politics less than interesting, said there was nothing “new.” I say that’s spinach, and to hell with it. Have movies about politics become like movies about sex, where fears and predilections of its critics are imposed atop opinions like damning CT scan results? Were they onto something? Does a process story like this, with its lightly coded spoken shorthand, extend beyond steady followers of politics? (“She’s gonna take this to Drudge or Roll Call or some shit.”) While traipsing a few familiar byways, the theme-and-variation script of “The Ides Of March” is one of the boldest political statements by an American filmmaker in memory: the telling’s not resigned to corruption or concession, but instead, it’s cognizant. Based on Beau Willimon’s play “Farragut North,” with a screenplay credited to Willimon, Clooney and Grant Heslov, “Ides” revisits the landscape of the 1970s paranoia thriller, like “All The President’s Men” to cool effect. Pennsylvania Governor “Mike Morris” (Clooney)—japingly close to “Michael Moore”—is in the waning, dead-even days of the Ohio Democratic presidential primary. Ryan Gosling plays his thirty-year-old wunderkind, but early on, the film’s greatest promise comes from the introductory killer’s-row eyelines exchanged between Philip Seymour Hoffman (always a cigarette over the limit) and Paul Giamatti (who looks the Yalie Mephistopheles version of a bearded Paul Begala). An intern (Evan Rachel Wood) enters the Cincinnati HQ, watched from behind; the camera follows the bounce of her shoulder-length blonde hair, the hike of her tall black boots, her skirt. A bullet in lilting slow motion. A similar image will come later, a chilly refrain. (In another striking image, Wood is lit in near darkness in the briefest of privileged moments as if from a painting by Tamara de Lempicka.)  The script rat-a-tats, not with classic badinage but good gab, and each actor’s role is spent in small, memorable lessons, exercises of beguiling, offhand exactitude. Clooney gets the reserve of the political operative, of the gifted actor. Consider how he uses the majestic understatement and essential charisma of Marisa Tomei in a small yet essential role as a New York Times reporter (horn rims, long waves of hair falling in her face, even as she’s “all business” with her subjects). The script is genially profane: handed a laptop, Morris says impatiently, “Give me a hard copy, I hate those fuckin’ things.” Words that would rest comfortably in the mouth of any given member of the cast: “These, these cocksuckers, fuckin’ dirty shit—prick. Motherfucker.” The plot turns on small follies, measured out in a scene where Gosling awaits his fate behind the wheel of a rental car in the dark: Cold, cold rain spats the windshield and shadows pool and part across his face. Kentucky native Clooney envisions Cincinnati like the most perfunctory of cities, and interiors of meeting rooms, bars and hotel rooms are framed with clean economy. Cinematographer Phedon Papamichael is revisiting the alternately plush and bleak shadows of cinematographers like “Master of Darkness” Gordon Willis, but with crispness that resembles the patient gaze of contemporary Romanian filmmaking. (This is a very good thing.) Everyone behind the camera’s on the top of an understated game as well: Alexandre Desplat’s score harks back to David Shire and other composers who worked in the 1970s. Notably, a trumpet emerges from a passage of his score as Gosling is silhouetted against an American flag at a moment the worm begins to turn. Elegiac or merely enunciatory? The opening shot is reminiscent of “The Parallax View”; the last of “The Candidate.” “What do we do now?” is Robert Redford’s character’s question to no one at all after winning an election in Michael Ritchie’s 1972 classic. We know the answer at the end of “Ides of March” even if it remains unexplained, even if “Hope” and “Change” are hardly likely to be in the offing. The lean editing is by Stephen Mirrione (“Good Night, and Good Luck.,” “Traffic,” ” Babel,” “Contagion”).  With Max Minghella, Jennifer Ehle, Chris Matthews, Charlie Rose, Rachel Maddow. 102m. (Ray Pride)

“The Ides Of March” opens Friday.