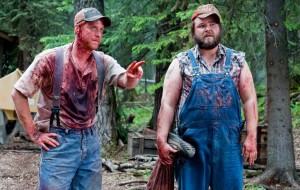 Horror-comedy’s hard, but Eli Craig’s daffy, near-delirious “Tucker & Dale Vs. Evil,” which debuted at Sundance and SXSW in 2010, makes the spurting, spirited redneck slasher movie look easy. The good guys live in the hills; it’s those terrible college students, an unaware “car full of morons” out on a lark who are going to step into all the wrong things. These guys aren’t bad: Call these surprisingly smart locals “Straw Puppies.”  Dale (Tyler Labine, “Rise of the Planet of the Apes”) and Tucker (Alan Tudyk, “Transformers: Dark of the Moon,” “Knocked Up”) defend themselves against a vortex of comic errors and instant misunderstandings. (“Pain and suffering on a scale you can’t even imagine” is promised them after the story’s second scrape.) Labine and Tudyk are an inspired pairing, playing off each other like the old friends they’re supposed to be in their reactions to each successive incident. Tudyk’s face is priceless as Labine attempts to offer an alibi to a cop, while realizing she’d be better “eff I hadn’t knocked her unconscious… with a shovel… on accident.” More in the spirit of “build a drive-in in your soul” than in “understand your friendly local tea partier,” Craig’s first feature is killer comedy, genre satire and spirited genre entry all in one. Tudyk, for example, has a way with a chainsaw that would impress Leatherface even on a bad day. That’s what you get for trying to be a “goddam Good Samaritan!” There are no musical numbers, but weirdly, it’s kind of a satisfying romance, too. (Co-producer Reliance Big Entertainment is also the key investor in Steven Spielberg’s DreamWorks.) With Katrina Bowden, Jesse Moss, Chelan Simmons, Travis Nelson, Alexander Arsenault, Adam Beauchesne. 88m. Widescreen. (Ray Pride)

“Tucker & Dale vs. Evil” opens Friday at the Music Box. A trailer is below.