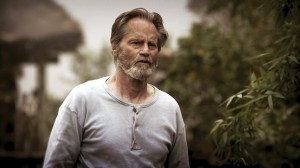 “Blackthorn” is not only a counterfactual tale, but a contra-legend: what if Butch Cassidy had survived that 1908 ambush by the Bolivian army to live out the next two decades in South American backwaters? In Spanish director Mateo Gil’s nicely minimalist telling, it’s more than raindrops that keep falling on his head. Living quietly as a horseman named “James Blackthorn,” Cassidy is inhabited by the too-rarely-seen Sam Shepard, stalwart, readily iconic, his face leather as runneled and cryptic as a chamois map, repeatedly folded and unfolded inside saddle pouches. (Shepard’s limited emotional range as a performer suits this weary elder.) Blackthorn, longing for home, finds himself in picturesque, even otherworldly Bolivian settings for what may be one last adventure with a much younger accomplice (Eduardo Noriega). Gil’s prior work includes screenplay collaborations with Alejandro Amenábar (“The Sea Inside,” “Open Your Eyes”). Shot, with evident glee and much eye-popping landscape, by Juan Ruiz Anchia (“Glengarry Glen Ross,” “Spartan”). With Nikolaj Coster-Waldau, Stephen Rea, Padraic Delaney. Widescreen. 98m. (Ray Pride)