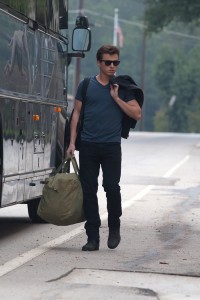 Almost shot-for-shot-faithful variations on Herbert Ross’ choreography from 1984’s “Footloose” are the first of the enjoyably engaging elements of Craig Brewer’s (“Hustle and Flow”) Southern variation on the Kevin Bacon-star-maker, largely cornball fashioned with dispatch. In bits and touches, Brewer makes “Footloose” personal. It’s set in the apocryphal backwater of “Bomont,” population 18,300, not too far from any number of danceable spaces, within hailing distance of M. Night Shyamalan’s “Village,” yet never far from Brewer’s beloved Memphis, even if the grit and grime of his earlier work never comes to full, bruised bloom. (“Get your fingers out of my pie” is typical of the tangy, slangy asides throughout; “Baby, simple elegance is something to strive for” is wry self-critique.) Brand names, from Heinz to Greyhound, sketch in the pepper-and-salt anachronism of Bomont. (Reader’s Digest Condensed Books molder in several scenes.) Spunky if slightly square, this “Footloose” works to make the compulsive protectiveness of the town’s parents as comprehensible as the teens’ impulse to cut loose.

Attenuated mourning replaces religiosity’s rectitude. (Lines like “We cannot be missing from our children’s lives,” invoked by Dennis Quaid’s preacher-father character, resonate beyond the film.) The young actors are virtual unknowns, but leads Kenny Wormald and Julianne Hough have a range of well-trained moves that Brewer allows them to show off. Of course he’s a fish out of water, he’s a Shark, he’s a Jet, he’s from Bah-ston. (It’s hard out here for a Southie, especially when he often looks like a fluffed-and-folded version of Johnny Depp’s “Cry Baby” character.) Slightly profane dialogue mingles with inspired moments such as a clutch of four-year-old girls teaching one of the teen boys the assured dance moves he’s going to need. The variety of music suggests less a jukebox than a recently dropped iPod forgetting how to properly shuffle. And yes, there is a sunstruck-yellow VW bug fixer-upper in the mix. Cinematographer Amy Vincent shot Brewer’s two prior features, as well as “Eve’s Bayou” and “Jawbreaker.” There’s a lot of attention to lighting effects, such as a first kiss at sundown’s golden hour, not only with the sun between the couple’s faces, but their faces fashioning a liquid, shimmering heart shape. With Andie MacDowell, Miles Teller, Patrick John Flueger. 113m. (Ray Pride)