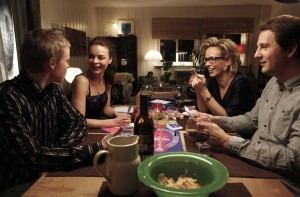 Anne Sewitsky’s “Happy, Happy” is a genial jab of a comedy about small frustrations and small satisfactions. A privileged couple in the Norwegian countryside rent a house out to new tenants, who have an adopted African son. The dynamics of the two couples quickly clash, especially in a discomfiting early dinner scene. Sexual dismay leads to emotional display, especially from the delightful Agnes Kittelsen whose needs the other characters respond to, whose character Sewitsky calls “insistently happy… her driving force becomes happiness.” There’s a jaw-dropping subplot about racism that will surely be daunting for some for the child’s-play way something extremely un-P.C. plays out. Still, Sewitsky’s sense of emotional and comedic pacing is never less than admirable: whatever the stakes, whatever the odd turn, she has an eye for keeping a casual, unforced feeling. “Happy, Happy” is Norway’s entry for the Best Foreign Language Film Oscar and won the Narrative World Cinema Grand Jury Prize at Sundance 2011. With Joachim Rafaelsen, Maibritt Saerens, Henrik Rafaelsen, Oskar Hernæs Brandsø, Ram Shihab Ebedy, Heine Totland. 88m. (Ray Pride)