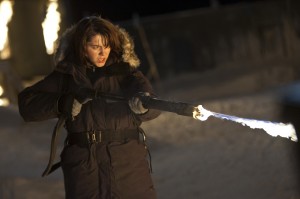 RECOMMENDED
“The Thing” is a clever prequel from the producers who remade “Dawn of the Dead,” director Matthijs van Heijningen, Jr. and writers Ronald D. Moore and Eric Heisserer, drawing on 1982 sci-fi horror film “The Thing,” which was based on the 1951 film “The Thing,” which, in turn, was based on the 1938 story “Who Goes There?” In the first film, a shipwrecked alien locked for eons in polar ice is just a big violent guy with the cells of a vegetable, an “intellectual carrot” and “super carrot,” cracks one character. The next film upgraded the alien to one that replicated animal cells and morphed into clones of dogs and their best two-legged friends. That one, directed by John Carpenter, began with crazed Norwegians in a helicopter shooting at a running dog. In the end credits of “The Thing” of 2011 we will see those very Norwegians and know why that dog must die for the sake of humanity. Columbia University paleontologist Kate Lloyd (Mary Elizabeth Winstead, “Scott Pilgrim vs. the World“) is in her lab listening to Men At Work sing “Who Can It Be Now” when she is alerted to “a structure and a specimen” in Antarctica. Off she goes to a  Norwegian base. After the obligatory peek through the microscope at extraterrestial cells behaving badly, Kate makes a diagnosis: “Not all of us are human.” A titanium implant, silver fillings and an earring ironically testify to unalloyed humanity when Kate discovers a criterion for quarantining suspected colleagues. The Cold War paranoia of the 1951 film does not carry over as political commentary on post-9/11 fear of others, but the generic scares work well. With Joel Edgerton, Adewale Akinnuoye-Agbaje, Ulrich Thomsen, Eric Christian Olsen, Trond Espen Seim. 103m. (Bill Stamets)
Ray Pride