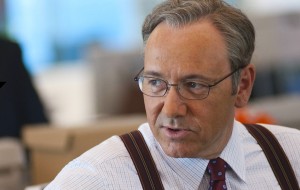 J.C. Chandor makes a poised and polished writing-directing debut with a Lehman Brothers-inspired story of an investment firm on the day-and-a-half it implodes. Set in New York City in 2008, “Margin Call” is more about character than acumen. Face-to-face decency is Chandor’s concern, not the volatility and venality of Wall Street. The son of a Merrill Lynch lifer, he once ran the drama club at his New Jersey high school. His screenplay recalls themes found in playwrights Arthur Miller and David Mamet, who likewise used American business as crucibles for the male psyche. Here three generations of white-collar men (plus a risk-assessment officer who is a woman) span seven echelons within the firm’s hierarchy. The strong ensemble cast shares well-crafted exchanges about their respective careers, long or short-changed. “Margin Call” is a sharp study of so-called human resources that’s less teary, yet no less topical than other recent layoff films like “Up in the Air” and “The Company Men.” Chandor limits his op-ed dialogue to a few passages that are supposed to sound fatuous, I trust. With “eight trillion dollars of paper around the world” in play, “Margin Call” is far better than Alan Pakula’s “Rollover” (1981) where a New York City bank crisis triggered by “Arab Euro-dollars” results in CNN reporting: “Last night protesters burned American currency in front of the White House.” That film had two work-related suicides and a corporate hitman killing a banker and a chauffeur. Thriller-style scoring, along with a few menacing framings, are at fault for making you expect fatalities in “Margin Call.” Blame the terminally ill pet of a divorcee for a small shovelful of borderline bathos. With Kevin Spacey, Paul Bettany, Jeremy Irons, Zachary Quinto, Penn Badgley, Simon Baker, Demi Moore, Stanley Tucci. 109m. (Bill Stamets)