“Texas Killing Fields” opens with swarming mood, of shadow and portent, of sound and music, that promise much. But director Ami Canaan Mann fails with the particulars of the plot, as police procedural overtakes specific and compelling performances by leads Sam Worthington, Jeffrey Dean Morgan and Jessica Chastain. A young woman’s disappearance prompts fixation by the most religiously inclined of the detectives upon memories of decades of women’s bodies dropped unceremoniously into swamps near Texas City. Storylines clash more than twine, but still the trio of detectives simmers, brandishing straightforward force-of-nature acting styles, yet never meshing with the film’s finer photographic aspirations. All three are fiercely present. The movie aches to be more: cruel yet lyrical, dispassionate and brooding, rather than elliptical and perplexing. One of the earliest shots is awe-inspiringly fine, dusk a crimson smudge behind a convenience market, the camera gliding around a stock-still, rain-soaked Chloë Grace Moretz, stranded in a crystal moment as if in a Gregory Crewdson photo tableau. Moretz’s character, escaping a neglectful mother with dodgy boyfriends, doesn’t add up, but she remains a fascinating actor, conveying fearfulness as readily as the blank affect an abused child uses as a mask. Mute menace prevails even with a raft of pleasing pulp passages like “I’m gonna go see a man about a man”; “This place is nothing but chaos, your God don’t even come here”; and “I just came from the biggest clusterfuck of my career to look at a map in mud.” Mann’s a woman of The Look: Barren stands of dead trees strive to sallow skies in salt marshes where the crickets abruptly end their song. A crime scene with a dead body has a whiff of Bruno Dumont (“Humanité”) with Michael Mann-style coral-orange 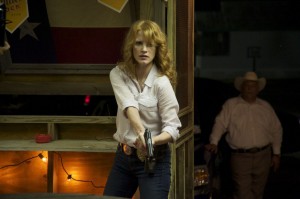 iridescences trembling off a stream’s surface in black night. Horizontal columns of white smoke discharge from a city-bright petrochemical plant on the horizon. Teeny ants fumble along a blueing palm. The small is proffered as profoundly large in most every setting. For instance, discreetly deployed American flags lack even the lift to tumble or waft. Cinematographer Stuart Dryburgh, originally from New Zealand, along the same approximate meridian as the locations of “Texas Killing Fields,” captures gradations of light and color that bruise and ravish on the big screen. Still, that’s not enough. The intermittently inspired music is by Dickon Hinchliffe, late of Tindersticks and contributor to the scores of most Claire Denis movies. Co-produced by Mann’s father, Michael Mann. With Jason Clarke, Annabeth Gish, Stephen Graham and a sullen, bedraggled Sheryl Lee as Moretz’s lost-soul mom. 105m. (Ray Pride)