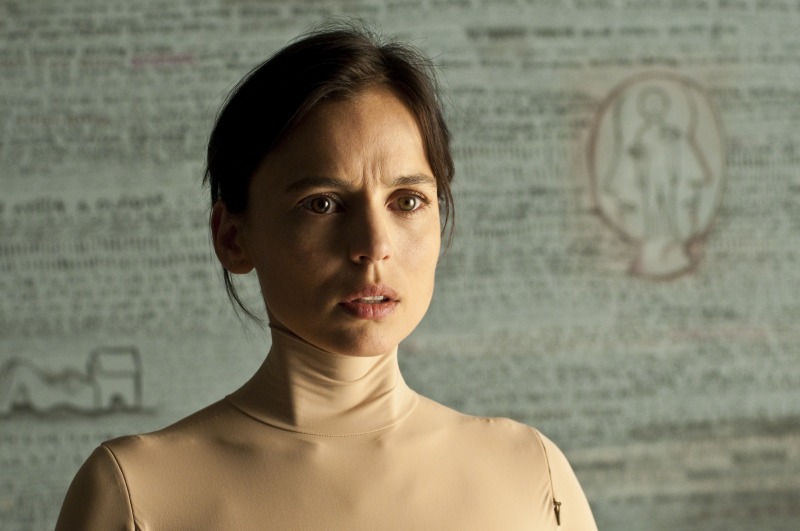 There are many ways to label the elegant “The Skin I Live In” (La Piel Que Habito)—silken, sinister, melodrama, neo-noir, sexual thriller, black comedy, “Vertigo”-meets-“Frankenstein,” the face of Franju’s “Eyes Without a Face,” a splicing of “Pygmalion,” a bursting design bazaar—but the DNA is all Almodóvar. The Spanish director’s latest feature, reuniting him with early muse Antonio Banderas, bears one of his darkest twists. Antiquity and futurism reside side-by-side in Toledo 2012: inside a rustic home outside the city, plastic surgeon Robert Ledgard (Banderas) has built a secret lab and operating room inside a glass-walled cube. He’s experimenting with a human subject, a woman, Vera Cruz (Elena Anaya) he has imprisoned in a room in his house, whom he observes like a living painting on an immense flat-screen monitor in the room across from his. Beyond the layers of skin in his “transmutagenic” playhouse, there are as many layers as an onion in both his story and the journey of his victim, based on “Tarantula,” by the late French novelist Thierry Jonquet. (Banderas has been quoted as saying he didn’t know if he was playing Shakespeare or in a cheap Mexican telenovela.) Two themes twine: what defines our physical sexual identity—the abrupt, perfect ending throws everything up into the air—and the amount of caution that ought to accompany protracted mourning lost love. Ledgard is humorless as well as ruthless, but Banderas’ performance is precise, such as an early breakfast where he tidily dresses his toast, then licks a last drop off an ampoule of honey. Vera’s story is revealed as slowly as the wall of her room she’s chalked with dates and reminders, weights of graphomania, to “breathe, breathe, breathe.” Yes, “respire”: breathe, breathe until you can avenge a terrible, near-unthinkable wrong. A cascade of tangled sheets throbbing with blood red and a floor covered with clumps of shreds of brightly colored sundresses are among the best of many vivid, punchy images. The work by Almodóvar’s regular collaborators, cinematographer José Luis Alcaine and composer Alberto Iglesias, is immaculate. In an untranslated passage in the end credits, Almodóvar makes a dedication to the artist Louise Bourgeois, whose sewn-cloth figures inspire the stitched-together Vera to make her own sculptures, and it’s the most resonant of many cultural references, including dozens of visible, suggestive paperback titles. With Marisa Paredes, Jan Cornet, Roberto Álamo, Eduard Fernández, Blanca Suárez, Susi Sánchez, Bárbara Lennie, Fernando Cayo, José Luis Gómez. 117m. (Ray Pride)

“The Skin I Live In” opens Friday at Landmark Century, Evanston Cinearts and Landmark Renaissance.