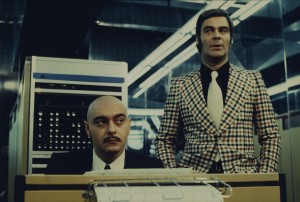 “World On A Wire,” (Welt am Draht) the late Rainer Werner Fassbinder’s 1973 science-fiction epic about virtual reality, made for German television, has been restored from its 16mm Ektachrome origins and into 35mm visual splendor. Among other things, it’s a gorgeous, strange time capsule of futurism past, with dollops of Philip K. Dick, intriguingly prescient musings on alternate realities, and many other recognizable Fassbinder themes and players brought at long last to light. In its story that collates three worlds, three levels of reality, there are only two words for it: It’s great. And it played its hypnotic mind games decades before “Blade Runner,” “The Matrix,” “Avatar” and “Inception.” Fassbinder does worthy battle with them all, before their time. Neo-noir intrigue rife with conspiracy paranoia is spurred by battle for control of the “Simulacron,” the computer that creates other worlds filled with “identity units” that believe they are sentient. Philosophical musings and a tincture of camp ensue, with mirrors, everywhere, reflecting everything and nothing. This tomorrow could have been made yesterday: despite being shot in odd corners in Europe in the early 1970s, there’s timeless elegance at every turn. Style survives like nothing else, transformed by later artists, sometimes merely signaled (see: “Mad Men”). The traveling camera alone is worth the three-and-a-half-hour ride, framing and reframing with the grace of two master dreamers: Fassbinder and his cinematographer Michael Ballhaus. Ballhaus shoots the film with doomy luxe, a decade before his career in the U.S., shooting movies for James L. Brooks, Robert Redford, Wolfgang Petersen, Prince, Marisa Silver and Martin Scorsese. (Ballhaus, credited as “Director of Restoration,” was also a principal in “The Thirteenth Floor,” the eccentric 1999 remake released by Columbia Pictures.) And Fassbinder, who died at the age of 37, was only 28 when he made this splendid film, no longer a footnote to his astonishing and vital filmography. With Klaus Löwitsch, Mascha Rabben, Ivan Desny, Barbara Valentin, Günter Lamprecht, Margit Carstensen, Ulli Lommel, Kurt Raab, Gottfried John, Hedi Ben Salem, Ingrid Caven, Peter Kern, Peter Moland, Werner Schroeter, Magdalena Montezuma, Eddie Constantine. 212m. (Part I, 105m; Part II 107m.) 35mm. (Ray Pride)

“World On A Wire” opens Friday at Siskel. A fascinating statement by Fassbinder on the film’s mind games in the press kit, which is available as a PDF here.