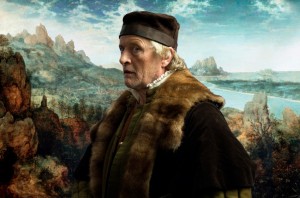 In Lech Majewski’s “The Mill And The Cross,” Rutger Hauer plays the painter Pieter Brueghel in a painstaking, heart-aching exploration of how he came to paint one of his epic masterpieces, “The Way to Calvary,” which transfers Christ’s Passion to Flanders under Spanish occupation in 1564. It is fine art in its own right, a breathtaking, magisterial digital experiment that pays off in layers and layers of rough-hewn beauty.

Three years of effort were necessary, combining painting, computer-generated technology and 3D effects to create an equivalent to critic Michael Francis Gibson’s book-length study of the work, also called “The Mill and the Cross.” Call it tableau vivant, call it living theater: it’s that and more, a stately essay in dense physical perspective about how a great and teeming painting came to be arrayed and peopled with its population of over 500 figures. The first shot, an extended traveling shot that moves horizontally across the landscape, holds the sort of plainly expressed beauty that all but begs a whimper of gratified disbelief from the viewer. The foreground figures, including Brueghel, consider the population of the painting to come as he describes its groupings, while smaller figures move or pose in middle and greater distance, undulant daubs, and all thrive against a stylized horizon, an ink work by Majewski drawn from the painting’s own backdrop.

The daily life of a dozen or so figures is highlighted, and the peasant quotidian is at once radiant and dismal, the rough lives and simple joy against a landscape of the mind and of a canvas finding its form. As Brueghel’s friend and art collector Nicholas Jonghelinck, Michael York may fret aloud over “the present fate of Flanders,” but the film’s seething beauty lies in its patient procession of incident and its intricate yet unshowy detail. Other artists live in the images; it’s not contained by only how one painter’s work looks. The sound of Spanish soldiers rise in fog along a rutted path in an image worthy of Ruysdael and his blurry rigor; interiors lit by lateral light from simple square windows are simplified Vermeer or other later masters of the Dutch interior. Majewski knows his old masters, and they, and mastery, are evoked in a visual realm that is both tactile and dreamy. 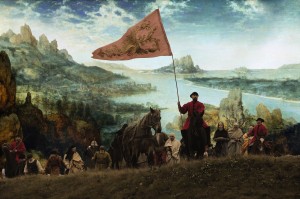 But it is the small gestures that sing from moment to moment. The protracted opening scene of dawn stirrings in a succession of households, from young to elderly, from clothed to nude, starts on a nest of unnumbered boys in sworls of blanket and duvet like so many giggling mice. Their boy-doings include a duel of armpit farts, which are intercut with Brueghel poking attentively at a spider in its dew-diamonded web. From deep shadows at dawn of Rembrandt dark to a town beginning to move through mist not yet burned off, there are all modest yet lavish intimations of bustling community and of the artist’s patterning of it all. The tiniest things sing, such as how a sword applied to an oiled whetstone wheel pings like a bell.

Majewski looks upon, not down on, Brueghel’s world, even the most brute episodes, with curiosity. While dense with palpable consideration and love for other painters of the era and the century after, “The Mill and The Cross” lives in gesture and moment, not for him the intimidation of Peter Greenaway’s latter-day full-past-bursting interrogations of art. As for cinematic predecessors, the vast hillside setting with the many figures suggest the plains of Hungary as shot by the master of the long, swirling take, Miklos Jancso, but Majewski’s camera holds close to face and figure rather than enacting its own dance. The workings of the vast grain mill, exaggerated on its exterior like something extracted from  “Caligari,” inside filled with huge precision gears, has the lumbering beauty of a Jeunet-Caro film like “City of Lost Children,” yet its crushing power and its churning, Icarus-striving blades are withheld for the film’s sustained, physically improbable camera movement that resolves the content of the painting. All is still but the tails of horses, sheep at their cud, and the roaming camera, seeking the final perspective of a painting that rests now on a wall in a gallery in London.

In one late image, Brueghel is in the distance, his drawings white leaves caught in the wind, capering along the ground under lowering dusk, beneath the caricatured mill on the hill that looms over the town. It’s haunting, as is the last, blunt tracking shot that provides one last fillip of context: the preliminary drawings may have gotten away, but not this canvas, not this dream, not Majewski’s serene attainment. The end credits burst with names from many nations, largely Polish, but include a “wheelified” man as well as crucified ones, as well as rosters of lesser nuns, heretics, hangmen, monks and malefactors. We all gather at the foot of the Cross, at the base of the hill.

“The Mill And The Cross” opens Friday at the Music Box.