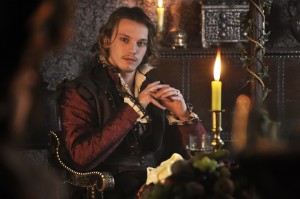 With “Anonymous,” director Roland Emmerich revisits the setup of his Munich film-school sci-fi thriller “The Noah’s Ark Principle” (1983): both begin and end with a dire face-off, one man at the mercy of another; in between are flashbacks to an earth-shaker of a secret to suppress. Big flames figure in both London as well as a low-orbital space lab. “Anonymous” traffics in hermeneutic intrigue: it’s an action popcorner with Elizabethan period CGI and discolored teeth. What’s at stake in “Anonymous” is the dodgy identity of the playwright and poet we know as William Shakespeare. “He was a fraud,” the director of “2012” told MTV. “I’m totally convinced. I think it’s not good to tell kids lies in school.” Edward de Vere (Rhys Ifans) is the true author, alleges the screenplay by John Orloff (“A Mighty Heart”). The player “William Shakespeare” (Rafe Spall) is an opportunistic Earl-extorter and crowd-surfer. This paranoid thriller is framed by a prologue where a modern-day Broadway marquee announces “Anonymous.” Derek Jacobi steps on stage to deliver a précis of John Thomas Looney’s 1920 book “‘Shakespeare’ Identified in Edward De Vere the Seventeenth Earl of Oxford.” Far less silly than the revisionist “Da Vinci Code,” the tony “Anonymous” parallels covert authors with royal incesters and bastard aspirants to the throne. Who knows not who is the stuff of a classic tragedy, notes one character who does know who bedded, backstabbed and beheaded whom. Emmerich lectures that words on the stage can move queens and commoners to make history, no matter if the wordsmith signed his name Shaksp, Shakspe, Shakesper, Shakespere, Shakspere or Shakspeare. With Vanessa Redgrave, Joely Richardson, David Thewlis, Xavier Samuel, Sebastian Armesto, Edward Hogg, Jamie Campbell Bower. 130m. (Bill Stamets)
“Anonymous” opens Friday.
Ray Pride