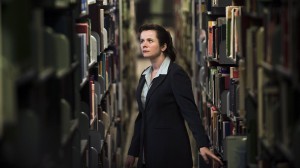 Child trafficking is a timeless terror. Across the 1940s and 1950s, 13,000 children ranging in age from three to fourteen in British government care were forcibly exported from the U.K. to unsurprisingly abusive Australian institutions. Child labor, physical and emotional cruelty and rape followed. An understated docudrama by Jim Loach (son of longtime activist filmmaker Ken Loach), “Oranges and Sunshine” is still, underneath its blanched, sober surfaces, a substantial tearjerker that considers their state after they’ve grown up. The scandal was unearthed in 1986 by social worker Margaret Humphreys (Emily Watson), and the adaptation of her memoir dwells on details that could have benefited from more drama, melodrama, even bombast. This is horror of mythic form: told your parents are dead, you must make do in the land that is far from the promised paradisiacal place of “oranges and sunshine.” Watson plays Humphreys with firm, sterling obstinacy. The material didn’t need an Alan Parker to amp it up, but could have used more of her sustained, quivery fury. Hugo Weaving, however, quietly impresses as a grown victim and lifetime depressive. (Phillip Noyce’s “Rabbit-Proof Fence,” taking on parallel abuse of aboriginal children in Australia, finds a more cinematic voice for its history.) While the program ended around 1970, the United Kingdom’s apology last year followed Australia’s in 2009. (There’s a terrible resonance with the history told in Robert Hughes’ “The Fatal Shore: The Epic Of Australian’s Founding,” but that’s one more potential thematic strand that’s coolly let lie.) With David Wenham, Greg Stone, Tara Morice, Richard Dillane, Aisling Loftus, Stuart Wolfenden. 106m. (Ray Pride)

“Oranges And Sunshine” opens Friday at Landmark Century and Renaissance.