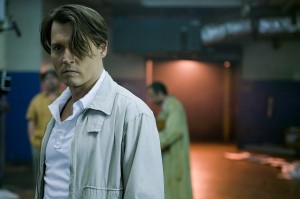 Puerto Rico, 1960. Everyone is insane, everyone is a maniac. Period. The Eisenhower era tumbles tightly to an end up north across the water. Here, it’s humid and there’s rum. There is ludic cynicism—”The average guy don’t rock the boat because they want to get on it”—and there is brittle contempt—”A liberal is a commie with a college education thinking Negro thoughts.” There is also Gonzo avant la lettre in this period piece: “You’re giving me fear!”/”You’re high, you fool!” In Bruce Robinson’s version of Hunter S. Thompson’s long-shelved first novel, journalist Paul Kemp (Johnny Depp) arrives at the San Juan Star, an English-language newspaper still in business more out of inertia than ambition. (Inchoate metaphors for the death of newspapers, media and merest civility abound.) But it’s a romance as well, a romance of the taking of oaths and making of sentences and the hope of everyday honor.  “Do you smell it?” Depp dabs late in the movie. “It’s the smell of bastards. It’s also the smell of truth. I smell ink.” Robinson hasn’t directed a feature in nineteen years, since a protracted wrangle with an unmovable power producer—Scott Rudin by name—on ill-fated procedural “Jennifer 8.” While Oscar-nominated for writing “The Killing Fields” and confector of one of the most remarkable of comedy directing debuts, “Withnail & I,” Robinson told the plush new British style magazine Port this month that he had been done with all but the typewriter for eons. “If this is filmmaking, then fuck it, I’ll just write books.” But he has the charming grin: “I think it’s good, and Johnny likes it. It’s got the fifties style thing going on, which is back in vogue, and it features a rotting newspaper at its center, which is quite timely, what with all these side-winding fuckers at [a media concern accused of far-reaching phone hacking in the U.K.].” His very free adaptation of “Rum” has arias of contumely that soar but I’m not as certain about the film overall: like all Robinson scripts, it sounds a dandy read in the brain but the movies’ central real estate scheme doesn’t sing or soar like his lavish lingo. Still, it’s every imperial quart a Bruce Robinson film, and the choice of Super 16mm and its 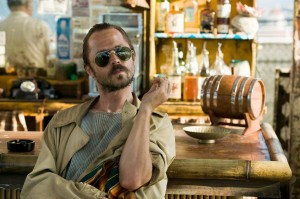 bibulous grain embellishes the mood in a way that digital formats would not. It’s not a matter of period: it’s a matter of looking hungover, despondent, and generally fucked-up and -over. And the other actors respond in Depp-style kind: there’s Richard Jenkins’ genial self-abasement itself as the editor who hired Kemp while juggling deadlines, a bad toupee and several seamy schemes on the side. Michael Rispoli is Kemp’s island-hardened guide, while a hint of “Withnail” comes in the form of Giovanni Ribisi, playing the paper’s “crime and religious correspondent,” a liltingly loathsome derelict of a dissolute journo, a latter-day version of Richard E. Grant’s lost soul in a trenchcoat and liver that lives still. He is a man who insists that 470-proof liquor exists, extracted from the damp flannels left over in rum distillation: ever-present aviators keep us at bay from the cistern of a blotto brain. Depp channels an HST who’s not yet jumpy and jaundiced, but the flat yet broad intonation of 1950s Louisville comes across clear as a bell. (The mid-century Central Kentucky mumble will live so long as son of the Commonwealth Depp lives.)  Co-producer Depp brings aboard colleagues from earlier adventures, including costume designer Colleen Atwood (“Public Enemies,” “Sweeney Todd: The Demon Barber of Fleet Street,” “Sleepy Hollow”). Cinematographer Darius Wolski’s work includes all four “Pirates of the Caribbean” entries, “Dark City” and “The Crow.”  With Amber Heard as a prototypical Varga girl kicking her period kicks this way and that and Aaron Eckhart as her fuming swain, the archetypal portrayal of the capitalist weed who shall never be uprooted. 120m. (Ray Pride)