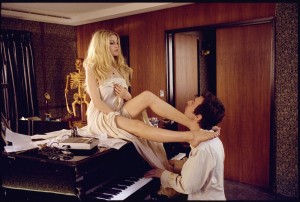 Fittingly, “Serge Gainsbourg: A Heroic Life” is a comic strip of the life of the French singer-sybarite who sang a song called “Comic Strip,” and directed by a French comic strip, or bande dessinée artist, Joann Sfar. A fantasticated and louche artifact, Sfar’s debut feature is layered with animation, puppets, copiously dressed interiors and sallies, like having the adult Gainsbourg read his reviews in the form of his younger self, echo bittersweetly. And of course, music, women, smoking. It’s comfortably far from the genre of awards-nabbing American musical biopics. One of the best features is how Sfar never makes Gainsbourg seem foolish, even when engaging the accusations of anti-Semitism that dogged his work in later years. Combining his adult fixations with his childhood fears, Sfar makes a fairytale as faithful in its own splendid fashion to his personas as any of the many videos and stills readily found online of Gainsbourg in performance or in stills provoking the bourgeoisie. With Eric Elmosnino as the grown Gainsbourg, and in the roles of muses Juliette Gréco (Anna Mouglalis), Brigitte Bardot (Laetitia Casta), France Gall (Sara Forestier) and Jane Birkin (Lucy Gordon). Doug Jones, who inhabits the dark corners of films by Guillermo del Toro, appears in several creature guises. With Kacey Mottet-Klein as petit Serge. 122m. 2.35 widescreen. (Ray Pride)

“Gainsbourg: A Heroic Life” is now playing at the Music Box.