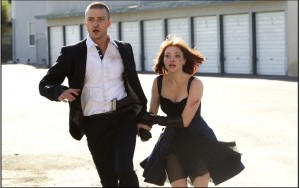 #OccupyGattaca! Clever lad Andrew Niccol’s latest high-conceit parallel-universe science-fiction allegory, “In Time,” is also a bold, goofy, political parable that pits plutocrats who “come from time” (time = money) against the ninety-nine percent of the population that pay out their days in seconds against minutes. The unexplained gene-splicing that allows everyone to stay twenty-five sets an internal clock ticking on that birthday, which gives you a year: a year of currency to spend in order to live. You can stay twenty-five forever if you earn enough time and also evade the police, now known as “Timekeepers.” Gimmick, yes, but even as he sets sail across plot craters, Niccol keeps the gears of his timepiece spinning. As for allegory? Let’s just say: “Occupy Wall Street: The Movie.” The synchronicity between parable and the streets outside doesn’t seem likely to draw an audience straightaway, but it’s one of the most memorable things about the latest film from the writer of “The Truman Show” and writer-director of “Gattaca” and “Lords of War.” As the first film shot with the new Alexa high-definition camera by the veteran cinematographer Roger Deakins (most of the Coen brothers’ latter-day catalogue), “In Time” lacks the piercing visual polish of “Gattaca,” but the picture of a civilization where, for instance, there’s no graffiti in the ghetto because no one has a second to spare, is sketched with simplified elegance. The saturation of the color is striking, especially in night-set scenes on Los Angeles locations. (It’s a step quieter than the electrified palette of “Drive.”) “The truth is, there’s more than enough,” Justin Timberlake’s prole character is told, provocatively, by a man in his hundreds who’s lost his interest in living. Overnight, he’s the lucky-unlucky recipient of a century of time. While on the run, he meets an heiress, played by Amanda Seyfried, with a bold wig that, with her large, wide eyes, transforms her into a manga Anna Karina or Louise Brooks. There’s a turn to the outlaw-couple genre that’s abrupt but gratifying, and they manage to make out like time bandits (Niccol thrills to on-the-nose jokes: there’s even a “99 Second Store” in the ghetto). At the time of “Gattaca,” Niccol told me of his design notions, “I didn’t want to be so futuristic, that people would just check out of it, saying ‘this has nothing to do with me.'” The masses thronging for a few more minutes in a few more days have an awful lot to do with today. With Cillian Murphy. 109m. Widescreen. (Ray Pride)

“In Time” is now playing.