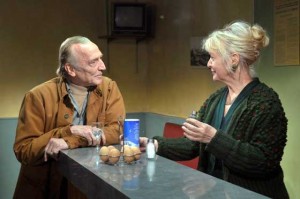 Aki Kaurismäki’s “Le Havre,” his first feature in too long, is an uncommonly gentle fairytale set in France, instead of among his comically solemn and bibulous Finns. It’s a political film, too, commenting on the life of immigrants to contemporary Europe. An elderly shoeshine man takes an African boy under his wing, annoying the local constabulary. How are they related? “I’m the family albino.” But there’s more to the elder man, Marcel Marx, a retired writer and “well-known Bohemian.” Kaurismäki’s best work, such as his bleak, near-perfect masterpiece, “The Match Factory Girl” shouldn’t be an acquired taste. He’s a wry Chaplin in the simplicity of his humor. As for the lighter “Le Havre,” the writer-producer-director who divides his time between Finland and Portugal, has written, “The European cinema has not much addressed the continuously worsening financial, political, and above all, moral crisis that has lead to the ever-unsolved question of refugees; refugees trying to find their way into the EU from abroad, and their irregular, often substandard treatment. I have no answer to this problem, but I still wanted to deal with the matter in this anyhow unrealistic film.” He says he’s an optimist: “I have always preferred the version of the fairy tale, where Little Red Riding Hood eats the wolf and not opposite, but in real life I prefer wolves to the pale men of Wall Street.” Customary cinematographer Timo Salminen shoots France as an outskirt of Helsinki. With André Wilms, Kati Outinen, Jean-Pierre Darroussin, Blondin Miguel, a hauntingly aged Jean-Pierre Leaud as a bad cop and one more Kaurismäki pooch named “Laika.” Kaurismäki’s taste in early rock ‘n’ roll extends to a bit of plangent surf-rock, “Matelot,” by the Renegades. 93m. (Ray Pride)

“Le Havre” opens Friday at the Music Box. A trailer is below.