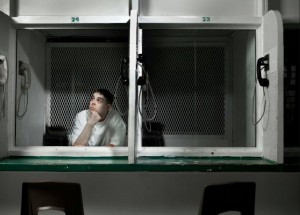 When Werner Herzog first began talking up his second documentary release of 2011, he joked that all of his films could be, should’ve been, called “Into the Abyss.”

The prolific sixty-nine-year-old director has also said there’s no such thing as documentary, that everything is, and ought to be, as much directed as it is observed, and the ultimate goal is nothing less than “ecstatic truth.” He’s made a couple of declarations as well as his endlessly quotable exclamations, including his 2010 essay, “On the Absolute, the Sublime and Ecstatic Truth” and his 1999 “Minnesota Declaration” (both wernerherzog.com/52.html). “By dint of declaration the so-called Cinema Verité is devoid of verité,” Herzog wrote. “It reaches a merely superficial truth, the truth of accountants.”

Another superficial truth of accountants is the ongoing stream of documentaries on movie screens. These days, many studio releases are screened for reviewers past print deadlines. All the reviews appear online, of course, but on a week like this, it makes it seem documentary is all there is, with “Into the Abyss,” “Revenge of the Electric Car,” “Bobby Fischer Against The World” and the Sigur Rós concert film, “Inni,” playing on Chicago screens.

In the past year, even an ardent follower and defender of nonfiction work could feel swamped by the waves of just plain documentaries. While there are dogged observers of process like Frederick Wiseman (and a number of younger Europeans) and ardent stylists like Errol Morris, too many present-day practitioners of documentary find a subject worthy and that seems the last conceptual thought. Bored, boring capsule reviews ensue.

In 2011, Herzog turned to 3D for “Cave of Forgotten Dreams” and to television-style rapid-fire production for “Into the Abyss: A Tale Of Death, A Tale Of Life,” taking a look at the particulars of a Texas triple homicide case, including one convicted killer within days of execution under Governor Rick Perry’s pen and those also affected, like a relative of two of the victims, a retired executioner and a chaplain. (In that regard, it makes a fine companion piece to Kartemquin’s “At The Death House Door,” about a chaplain who wearied after fifteen years of counseling those about to be executed by the state of Texas.)

Herzog is an astute interviewer, and he has written that he drew on very simple beliefs: “I am not an advocate of the death penalty. I do not even have an argument; I only have a story, the history of the barbarism of Nazi Germany. The argument that innocent men and women have been executed is, in my opinion, only a secondary one. A State should not be allowed—under any circumstance—to execute anyone for any reason. End of story” Or the beginning: Herzog pulls his persona away from the film, letting the form of his inquiry—shaped by longtime Herzog editor Joe Bini—make its straightforward case.

“Revenge of the Electric Car” is an advocacy documentary, and a sequel as well, to Chris Paine’s spirited 2006 jeremiad about General Motors’ crushing of its experimental car. That it’s a sequel, and the booster of a cause, however optimistic, is to the film’s detriment: it’s the equivalent of a t-shirt slogan described over and over again by its talking heads. Disinterest sets in; aggravation follows soon after. Liz Garbus’ “Bobby Fischer Against The World” fares better, with a compelling, if deeply troubling protagonist. Where Herzog tends to the visionary, and Paine to the pamphlet, Garbus’ latest work is a strong example of the straightforward, made-for-HBO documentary in capturing a moment of history or the incandescence of a historical figure by alternating interviews and a wealth of archival footage. In 1972, chess master Fischer squared off with Soviet Boris Spassky in the chess “Match of the Century” in Reykjavik, Iceland. The figures interviewed suggest a strong link between his gifts and his faults, the eccentric behavior that manifested later in the form of symptoms of extreme mental illness. Worthy subject, worthy treatment, still depressing as they come.

With “Inni,” filmmaker Vincent Morisset turns himself over to a different form of the “ecstatic” than Herzog may have had in mind, a highly stylized filming of what may have been the last concert tour of Icelandic band Sigur Rós in 2008. Sound takes precedence in its distribution worldwide, booked in venues with the capability of playing very, very loud. Home movies of the band when younger bring the slightest color to a largely black-and-white film, which was rephotographed and otherwise muddied in post-production, highlighting sway of grain, textures, motion, near-abstractions that suit the ethereal grace of long passages of the band’s music.

“What’s its message?” someone might ask. Gah! Beauty. There’s trouble in the world, but beauty, too.

“Inni” plays Wednesday at Lincoln Hall. Opening Friday: “Bobby Fischer Versus the World” at Facets; “Revenge of the Electric Car” at Siskel; and  “Into the Abyss” at Landmark Century.