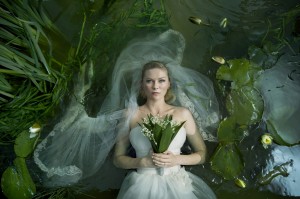 Lars Von Trier starts at the apocalypse and then works his way from there: the planet’s the Titanic. There’s been controversy about jokes-gone-deadly that Von Trier said at the press conference after the debut of the bold, wrenching, relentless, majestic “Melancholia” at the Cannes Film Festival this year, but there’s no dispute he’s one of the few directors who would react to a serious bout of depression by writing an intimate, tear-coursed family melodrama that demolishes the world entire. That’s not a spoiler, but the primary story element: another planet (not “Another Earth”) fills the sky as it rushes toward a collision with ours. (The errant orb is called… Melancholia.) It’s a B-movie conceit put in the service of philosophical musing, an opera built atop the chamber drama of “The Celebration.” In the best passages of his work, imagery seems to come to Von Trier as readily as speech to others, demonstrating a kind of tenderness that checks other aspects of his movies, such as telegraphic dialogue. His oft-sardonic, superior air dissipates here: Lyric and loving in a way that suggests a kinship to the elder filmmaker Terrence Malick and his “Tree of Life,” “Melancholia” mingles poetry and melodrama. There is, however, a greater Kino-God in the equation: A specific shot of white fabric floating down a stream evokes spilled milk and blood in Tarkovsky’s “Andrei Rublev,” and Von Trier wishes to sit at the master’s table. And there’s a tincture of Buñuel in the privileged characters’ attempt to ignore onrushing extinction. There are also images at the opening and close (accompanied by—d’oh!—Wagner) that pitch fierce battle against Malick’s most piercing notations in “Tree.” (Von Trier is also determined to become the modern master of extreme slow motion, as in, “Wow.”) Set partly at a wedding reception in a location that knowingly echoes Alain Resnais’ time-puzzling “Last Year at Marienbad,” “Melancholia” bristles with fine performances from Alexander Skarsgård, Charlotte Gainsbourg, Kiefer Sutherland, John Hurt, Charlotte Rampling, Stellan Skarsgård and the ever-wondrous Udo Kier. But at the center of it all: Kirsten Dunst. Magnificent. There’s expressive greatness in her performance: quivering, alive, hurt. If you don’t love “Melancholia,” you still can’t help but love her and her character. Not beauty: humanity. The world ends not with a bang, but a human face. Could “Melancholia” be a masterpiece? Thinking… thinking… 119m. (Ray Pride)

“Melancholia” opens Friday at Landmark Century and Renaissance Place. The trailer below offers a fine taste.