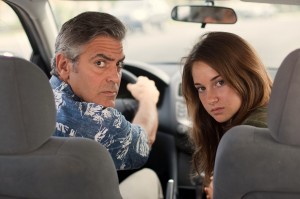 “The Descendants,” Alexander Payne’s first feature in six years, bookends with two exquisitely measured shots, and in conversation with each other, define what comes between.

The resolution I won’t mention in a review, but it resonates with a rare sense of both closure and completion to a tempest-tossed, frayed-nerve drama about family, responsibility, and legacy that reaches down generations.

Under black, followed by a slow fade-in, accompanied by a not-immediately decipherable roar, the single-take shot centers a middle-aged woman, waterskiing off Waikiki, at the height of her life, smiling wildly, in a moment, in just this moment: Elizabeth King, mother to two daughters, wife of Hawaii real estate heir Matt King (George Clooney). Atop chop of sea, the tether that holds her to the unseen boat extends on an acute diagonal toward the unseen boat. Indistinct land lays lush green behind her, far away. The clouds are lovely and mute. Life is but this thrill. Sound and image fade slowly, ominously to black.

Offscreen, seconds later, Elizabeth, who was meant to be driving the boat, has an accident and falls into a coma. We learn this immediately in a voiceover by Matt, confided by Clooney in a tense, increasingly flustered tone: “My friends on the mainland think because I live in Hawaii, I live in paradise. Like a permanent vacation, we’re all just out here drinking Mai Tais, shaking our hips and catching waves. Are they nuts? Paradise! Fuck paradise!”

Welcome to a world of Payne. Rich in both dialogue and setting, “The Descendants,” based on a novel by Kaui Hart Hemmings and adapted by Payne, Nat Faxon and Jim Rash, is a middle-age crisis writ large. Not only is the family torn by Elizabeth’s absence and the potential of her not recovering, but Matt, a Honolulu lawyer, is also the parsimonious executor of a trust that bears a huge legacy, a vast tract of undeveloped Hawaiian land that has been in the family for generations. We’re told his great-great-grandmother was Princess Margaret Ke‘alohilani, one of the last direct descendants of King Kamehameha, who fell in love with her foreign banker, Matt’s grandfather, a litany of “grands” back. Faced with a deadline set by law for the dissolution of the trust, Matt has to deal with a raft of relatives all eager to divvy up the proceeds, as well as ten-year-old daughter Scottie (Amara Miller) and seventeen-year-old Alexandra (Shailene Woodley). Tense is a modest description, until a further complication arises: Alexandra, who specializes in acting out, reveals that the comatose Elizabeth had been unfaithful.

“Did she love him?” is a question that could be asked of all of the characters, too numerous to count down here: not just what they want, but who do they love? A sweet thrill of “The Descendants” was discovering its moment-to-moment pulse that remains sardonic and critical in so many ways, and often very, very funny, the sense of distance, remove, superiority and condescension that often seeps from Payne’s earlier work—”Sideways,” “About Schmidt”—all but washes away. The casting is stellar throughout, including roles for Robert Forster, Beau Bridges, Matthew Lillard and the astonishing Judy Greer that match Clooney’s depth of feeling, but it is Woodley (“The Secret Life of the American Teenager”) who best embodies the rage, fear and other emotions that sear the film. While Anna Paquin’s tumultuous turn in “Margaret” is a masterpiece of teen turmoil, Woodley’s embodies a luminous brat, yet also a smart, maturing, immature young woman that ranks within hailing distance of that performance.

In dialogue and intermittent narration, “The Descendants” has a novel’s melancholy regard, along with tossed-off observations like, “In Hawaii, some of the most powerful people look like bums and stuntmen.” The placement of the simplest cliché turns to bracing poetry: “I got nothing but time” is gently tossed off but resonates across every part of the story, present, past, what may come. (There are many splendid lines; some dauntingly profane, not to be spoiled.) This is the great Alexander Payne movie, simple, bravura, filled with laughs, fears and hope, like crying, gratefully, while eating ice cream.