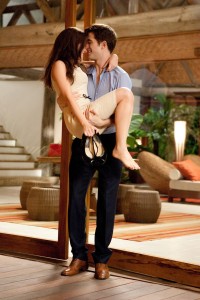 Antiseptic yet endearingly lurid, shiny as a polished stone, Bill Condon’s first of two “Twilight: Breaking Dawn” movies is a couple degrees cooler than camp but at least warmer than the grave. The Oscar-winning writer-director (for the script of “Gods and Monsters”) approaches the material with more tongue-in-cheek, largely in line readings, than earlier directors confronting the sparkly vampires and doggie werewolf boys who surround its hard-crushing teen-girl protagonist Bella. It’s efficient filmmaking shot straight to the heart of its expectant target audience. Kristen Stewart’s nasal murmur, smaller and smaller beside Robert Pattinson, makes for a toothy tiny bride in brown-eyed contacts, blushing, barefoot. Eat, prey, turn? Marry, fuck, thrill? “You have to accept what is,” a character says, meaningfully meaningless.

Post-wedding, whisked halfway across the globe to a Brazilian island retreat owned by the Cullen family, the pair plop into an idyllic setting. “I could use a few human moments,” she says, before bedding down with her inhuman groom. (Something any supernatural romance could use a few more of.) But when Bella and Edward attempt interspecies-undead-to-living sex, the gloss extends to her bruises left from off-screen violence, and while the character is eighteen, she excuses the treatment with the sort of excuses an abuse victim in her thirties might invoke. She likes it! The suggestion is less of consensual role-play than submitting to a violent mate, which may or may not be the tone in the novel. She’s crushed and blood-bruised into submission, to his post-mortification. “Don’t ruin this. Why can’t you see how perfectly happy I am? I think it’s amazing,” she tells him before a montage of moonlit swims, waterfalls and pooching her bottom out in a succession of subtropical romper sets. You have to accept what is.

Meanwhile, there’s someone else “being miserable about someone you can’t have.” Condon also demonstrates skill in working with non-actors, as in the case of slit-eyed ingénue Lautner, who is often the living embodiment of a stage direction: A THOUGHT CREASES JACOB’S BROW. Lautner tosses off “Whatever”s with all the conviction of a complacent Democratic congressman.

That one night of bliss has a result: “It’s a little baby—” “Fetus—” is the ping-and-pong argument over nomenclature about the hard-charging demon load in Bella’s belly. Screenwriter Melissa Rosenberg told the Wall Street Journal on opening day, “I’m pro-choice, and in deciding to take this job of the last book I had to know going in that I wasn’t going to violate my beliefs or Stephenie’s. There’s no amount of money in the world that I’d take to write something that was anti-choice.” Enter: “It’s not like I’m the one carrying a demon!”

Most of the cast are bloodless by contrast, gleaming-eyed, skin a cast of white or green, pasty hominids who seem to be wearing the orthochromatic makeup used in the silent era to capture something like skin tone on early black-and-white stocks. (The stock wasn’t sensitive to the color red.) There’s wall-to-wall music, ranging from moony pop songs to Carter Burwell’s busy score. Some young popsters are making sums princely enough to almost pay back their student loans.

Hints of directorial personality beyond simple efficiency peek out here and there, as in a brief early scene, a kind of “Yobs and Monsters,” where a younger Edward is on the prowl at a movie palace showing “Bride of Frankenstein,” where mashers are a-sniff after a flapper in a cloche. But for the screenwriter who began in his early twenties as the writer of  termite genre blends “Strange Behavior” and “Strange Invaders” (the original title of the first was “Dead Kids”), the most vibrant burst comes with the end credits, designed by Kyle Cooper’s Prologue Films, drawing from a typographic vocabulary evoking Stanley Kubrick and Gaspar Noé. It’s a neat, jarring complement to the moment where the story pauses, until November 2012. 117m. (Ray Pride)