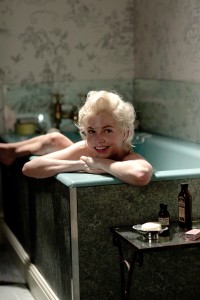 In “My Week With Marilyn,” Michelle Williams astonishes in an otherwise routine film: the pixie-cut so-serious performer from “Blue Valentine,” “Shutter Island,” “Incendiary” and “Wendy And Lucy” finds her way easily, silkily, into Marilyn Monroe’s fragility but also her teasing intelligence. Set in 1956 during the shooting of “The Prince and the Showgirl,” directed by Laurence Olivier (doughy, plummy, hammy Kenneth Branagh), “My Week” posits a love affair of sorts between Monroe and the twenty-three-year-old director’s assistant Colin Clark (Eddie Redmayne) who later composed a pair of memoirs claiming intimacies with the then-biggest movie star in the world. Meanwhile, her “Method” dithering contrasts with Olivier’s stage-trained technique. Names are dropped and bits of behavior amuse, but it’s all set dressing for Williams’ work, almost like a heavily posed Vanity Fair feature dressed to the nines. First-time feature director Simon Curtis, a stage director with credits that include “The Rise and Fall of Little Voice” at Steppenwolf and on Broadway and the world premiere of Jim Cartwright’s “Road,” works in a brisk and painless British televisual style. Emma Watson is on hand as a costumer on the set, with her modest brown-eyed gleam to chastise Colin’s attempt to rise above his callow station. Impersonation? Transformation? Williams’ performance makes all the rest go away, especially the terrible stick of wood Arthur Miller is presented as in the body and caveman garble of Dougray Scott. And there are nice bits from Branagh, as the script suggests his fears and Monroe’s are not so far apart: “I spend it in bloody abject terror, that’s what actors do.” The single most inspired scene, after a passage of barefoot fawn behavior has Marilyn turn to Colin and say, “Shall I be her?” meaning, shall I turn myself in a glimmering instant into “Marilyn.” And she does. “Shall I be her?” I love that moment. The four false endings are pretty but almost comically anticlimactic. With a special “Marilyn’s Theme” composed by Alexandre Desplat. With Dominic Cooper, Derek Jacobi, Toby Jones, Julia Ormond, Simon Russell Beale, Zoë Wanamaker, Judi Dench. 99m. (Ray Pride)

“My Week With Marilyn” opens Wednesday at Landmark Century, Renaissance and other locations.