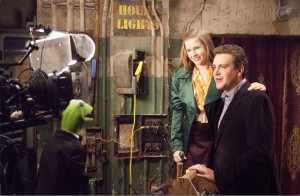 “The Muppets” wants to be the greatest Muppet movie of all time, but it’s more of a love letter from a stalker who may love just a little too much.

If you don’t have a well of childhood nostalgia for these characters, this first Muppet feature since 1999, and the first under Disney’s name, is going to be a slog. “The Muppet Show,” which viewers of a certain age may have watched repeatedly from the age of ten, comes from a generation of writers now in their seventies or older, who would have had fair acquaintance in their own lifetime of the music hall, burlesque and the panto, watching shows like Sid Caesar’s “Your Show of Shows” or Milton Berle. There was a legacy at work, this style of humor was in their bones and in episodes of the TV series, a style that co-writers Jason Segel and Nicholas Stoller don’t replicate within their own generation. What was a language of self-mockery becomes a lingo of lame, and the ersatz Muppet behavior here finds them not so much lovable underdogs as self-serious sadsacks.

Segel, who says that his greatest ambition in the film business was to bring the Muppets back to the screen, has instincts on the level of one recurrent latter-day apparition of Muppetry, that constant of hipster Halloween, where circulating on an urban street or a clamoring party, there will always be a chatter of Beakers, a callow of Kermits, the occasional solo Monster: grinning men dressed up as their Muppet id. Jason Segel’s fake smiles capture none of the casual charm he brandishes in “How I Met Your Mother,” instead forcing the jokes and songs and grins, like Vince Vaughn without an edge.

The movie opens in a dreary version of Pleasantville with Gary (Segel) and Mary’s (Amy Adams) fortysomething sweethearts stuck in another year—1978? 1948?—with the very tall Segel brother to a much smaller Muppet named Walter. A Los Angeles trip for the seemingly celibate duo’s tenth anniversary goes awry when Walter demands to be taken on every Muppet attraction in California, which all turn out to be cobwebbed failures, with the studios set to be bought up by an unctuous oilman (Chris Cooper). At the former studios, now a Gower Gulch death row, Alan Arkin’s tour guide is so deadpan he might as well be dead. Don Burgess, cinematographer for Robert Zemeckis back when he made live-action movies, does the actors no favors, including Adams, high-heeled, barelegged, lit unkindly, and Rashida Jones, who, as a network executive, ought to sue: her every expression is captured as the sum of twitch and cheek-crease.

Most of the comedy consists of callbacks to past, largely forgotten skits for those who have gorged on every facet of Muppet minutiae. The cleverest joke of “The Muppets” may be a chorus of lame fowl clucking out Cee Lo’s “Fuck You,” unless you count the woman sitting next to me at the preview who laughed not even once, but narrated throughout, “That was funny.” “That was hilarious.” “That is so funny.” This movie was made for her. She was hilarious.

The movie beats us over the head in telling us incessantly that The Muppets are ancient, irrelevant, forgotten, forgettable, sad and quaint goody-two-shoes. The movie, by first-time feature director James Bobin (“Flight of the Conchords,” “Da Ali G Show”) seems to aim at being soft-felt “Moulin Rouge” in its low-budget musical interludes, and there’s lots of room in its spasmodic form for “Hellzapoppin”-type non-sequitur, but it hardly rises to “hecks-a-poppin.”

Of all the actors, Cooper acquits himself with his call to his henchmuppets, “Maniacal laugh… maniacal laugh… maniiiiiacal laugh.” (His brief musical contribution is the highest of lowlights.) Withered music-hall man Mickey Rooney gets a single blurt, as shrunken and small as any given fist that holds a Muppet upright. The amplitude of often inscrutable and mostly inconsequential cameos extends to James Carville, Whoopi Goldberg, Judd Hirsch, Zach Galifianakis, Neil Patrick Harris, Ken Jeong, Sarah Silverman, John Krasinski, Emily Blunt, Dave Grohl and Feist. The product placement is eccentric, too: the oilman reads from a magazine: “The Economist says the Muppets are getting back together.” But see also the insertion of the Hard Rock Café; Oscar’s home turf, the Kodak Theatre; billboards for “Cars 2”;  as well as Google, Red Bull, Sephora and Selena Gomez.

And a key plot point involves whistling. Whistling! It might as well be Roger Ebert’s beloved Tro-lo-lo Man scratching nails across a chalkboard. There’s even a lengthy, self-congratulatory mass flash-mob musical number on Hollywood Boulevard. We are in the modern world, golly! “The Muppets” is a thoroughly modern decamillion-dollar production: it spends substantial sweat just to be not very good at all. What ought to be felt… is only dryer sheet.