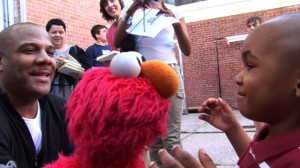 What mimes and truly creepy clowns are to most people, puppets, puppeteers and child magicians are to me: weird and chilling. In “Being Elmo: A Puppeteer’s Journey,” documentarian Constance Marks works the sunniness and uplift in her sweet-to-saccharine telling of the life story of Kevin Clash, the puppeteer and voice behind Sesame Street’s hug-happy “Elmo” character. Prizes have been lavished at festivals across the nation. If I were four, I’d be bored and aggravated for different reasons, largely the grown-ups who are as sincere and earnest as a painting of sunshine. The Baltimore-born Clash’s childhood dream of working with Jim Henson came true, and we got this documentary, from “Labyrinth” to “Sesame Street” and squealing kids nationwide. There’s a hint of strife in the now-fifty-one-year-old Clash’s avowed regret at having neglected his daughter while on tour after tour, but the grins-and-giggles are the point of this skeletal documentary, which also makes no large point of Clash being “Sesame Street”‘s first African-American primary puppeteer.  Narrated by Whoopi Goldberg. “Being Elmo” took a special Jury Prize on its Sundance 2011 premiere. With Bill Barretta, Fran Bill, Joan Ganz Cooney, Rosie O’Donnell, Frank Oz, Martin P. Robinson, Caroll Spinney. 75m. (Ray Pride)

“Being Elmo: A Puppeteer’s Journey” opens Friday at Siskel.