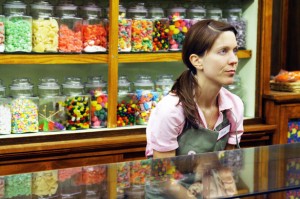 “Fuckin’ Laurelwood.” A profane black comedy of mortification from brash writer-director-producer-editor James Westby, “Rid of Me” is an alarming send-up of small-town smuggery, anchored by a vivid performance by co-producer Katie O’Grady. Newly married Meris (O’Grady) moves to the Oregon hometown of her husband, Mitch (John Keyser) after his business fails, having no idea just how insular life will quickly become in Laurelwood. While Meris is a hopeful, awkward sort, she’s surrounded by unpleasant people, starting with her husband, who’s treating her badly on the road trip to their new apartment. “It’s Or-u-gon. Three syllables,” he sneers when she says, “Orgon,” a prick from the get-go. Meris quickly discovers Mitch’s friends are nightmarishly crass, a contemptible rash of Stepford Assholes. Fitting into an American school of new low-budget, regional comedies about flawed characters, including Aaron Katz’s “Cold Weather” and Alex Ross Perry’s’ “The Color Wheel,” “Rid of Me” extends the dark comedic instincts of Westby’s earlier work, including “The Auteur” (2008). The joy he finds in spoken obscenity is contagious, as Meris, dumped by her husband for an earlier flame of his, finds self-realization through candy and punk and karaoke and an awful lot of cigarettes. “I don’t like alternative people,” one sad co-candy-clerk tells her; her facilitator-of-life co-clerk exclaims, impressed, “You wiped your menses on a woman at the market!” “It had to be done.” Drawing from over a hundred hours of footage edited down for over a year, the tone of “Rid of Me” is more drastic than a mainstream mean comedy like “Mean Girls,” assured, but it’s a provocative, spasmodic mix of melodrama and horror. With Art Alexakis (of Everclear), Storm Large, Orianna Herrman, Theresa Russell (“Bad Timing”). 89m. (Ray Pride)

“Rid of Me” opens Friday at Facets. A trailer is below.