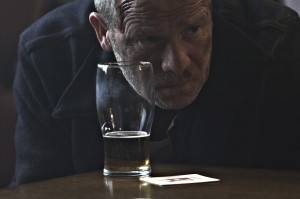 “Tyrannosaur,” Paddy Considine’s violent, profane, engulfing debut as feature writer-director, has the hallmarks of his performances as a natural actor: sincerity that can scintillate or scald in unpredictable measure. As production began, Considine reportedly told his actors they were making “cinema,” not just another small British movie. Shot on seedy locations in Leeds, “Tyrannosaur” expands Considine’s short film “Dog Altogether,” which introduced Peter Mullan’s Joseph, a violent man prone to the drink and self-pity. Here, he’s a cauldron of hurt and rage, and when he meets Hannah (Olivia Colman, crushingly good), a kind woman who runs a Christian charity shop, his emotions run higher. (They wash up against each other in a storefront clotted with the trash of others.) Hannah has her own dark places, including those inhabited by her abusive husband (Eddie Marsan, playing a king rat among rats). Terrible things happen: fearsome and wet and bloody. Yes, and serious: this is a spare, unrelenting film that opens with its protagonist, drunk from the pub, kicking his own dog to death. Dare to empathize now: All the lines on Mullan’s face seem earned when they teem with tears. So much pain. So much dark beauty. All three leads inhabit their roles formidably, but Mullan and Colman (and Considine) strive voraciously toward grace. And greatness. If you can withstand the insistent miserabilism, this is one of the year’s most devastating, yet redemptive cinema experiences. At Sundance 2011, “Tyrannosaur” won a World Cinema Jury Prize, Dramatic, for Breakout Performances and Directing Award, Dramatic. 91m. (Ray Pride)