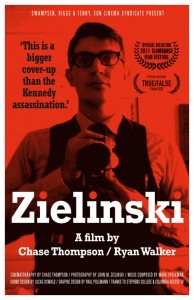 “Pedophilia owns this nation!” Like a distressed thumbprint, “Zielinski” is a formal conniption. Decades before any “Occupy,” talented photographer John M. Zielinski, published in Life magazine and the New York Times, had studded his mind with hashtags referring to vast corridors of connections and collusion and conspiracy. Happening onto public-access cable television, Zielinski began to chronicle crusades against all manner of corruption, cover-ups and turpitude, imagined or real about human trafficking and other black crimes. Chase Thompson and Ryan Walker’s portrait of  “the most blacklisted author in the history of Iowa,” a conspiracy theorist par excellence, the engagingly fractured, blackly comic “Zielinski” debuted at Slamdance 2011 and played the True/False documentary festival a few months later, in Columbia, Missouri, where Zielinski now lives. Its myth of madness keeps you wondering how much this now-old man is on the ball. 66m. Also: Jay Rosenblatt’s “The D Train” (5m). (Ray Pride)