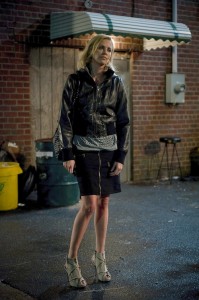 “Young Adult” is as slim a character study as you can imagine, resting on the shoulders of a very game, very fine Charlize Theron.

This sly snapshot, written by Diablo Cody (“Juno”) and directed by Jason Reitman (“Juno,” “Up in the Air”) is a small watercolor of everyday Midwestern alienation with thirty-seven-year-old Mavis Gary, a ghost writer of a waning young-adult novel series with titles like “Fatally Focused” and “Galloping Toward Trouble,” living in a shabby cell of an apartment in a Minneapolis condo high-rise, surrounded by empty bottles of red wine and vodka, empty Ritz Cracker cartons, more vodka bottles, unreality television: the first words we hear as Mavis stirs to life in her gone-gray Hello Kitty t-shirt come from a TV soundtrack. “Kendra, you’re the most beautiful woman in the world.” Mavis looks tired, haggard yet only seconds away from being radiant. A few galumphing slugs of Diet Coke from the two-liter bottle, our anti-heroine’s day begins.

Her hideous, small, depressing, neglected white snowball dog with sleepers around its eyes—Dolce—pads around. Her MacBook’s trackpad is filthy, and she spits on an HP ink cartridge to get a last page printed out, which turns out to be a sorry striated mess of colors of an email from an ex, Buddy Slade (Patrick Wilson), who’s mass-sent a photo of his new baby girl. In these moments in her cell, she snaps, decides she’ll go back home and find some way to tear him away from his happy family.

In a way, “Young Adult” is a distaff version of Noah Baumbach’s “Greenberg,” taking a deeply troubled, seriously bitter smart grown-up and near wallowing in their rude, mostly clueless behaviors. How differently would Mavis Gary’s delusions play if Theron weren’t beautiful? Reitman and Cody suggest that beauty is part of Mavis’ problem, with fetishistically detailed montages displaying how she gets ready for her clumsy, implausible attempts at seduction: a manicure; brushing and glossing makeup on for a night; a pedicure; doing makeup for the day; dressing in a killer sheath for her ultimate sally. Her exquisite face is a kind of unsocialized blank, a silvered mirror, reflecting the impatience and lifelong hauteur within. She’s a walking contradiction, a grown-up writing young-adult novels but not moving along in her own life. The ironies are brushed in gently, making the film lighter than the impressive gravity of Theron’s majestic malice and grand disdain.

A carousel of unreality television in her mind—always playing quietly, a tattoo of Kardashian chatter in the background—Mavis returns to the bosom of Mercury, Minnesota, meeting up with Buddy, played by Wilson with kindly incomprehension. (And his given name always sounds like a belittling nickname: “Buddy”; “Bu-dee.”) Fuel to the fire is the fact that his wife (Elizabeth Reaser, “The Twilight Saga”) is smart and engaging, and also a teacher of children with special needs. (The scene where we learn about her work plays as a diagnosis of Mavis’ blunt affect.)

She encounters a high-school adversary of sorts in one of the local dive bars, Matt (Patton Oswalt), who turns out to be her equal in intelligence and disillusion, and has his own dark places we learn of immediately. Oswalt’s voice for Remy in “Ratatouille” is stuff for the ages, but even more than in “Big Fan,” he shows he’s got the knack—his Matt is resigned, bemused, overlooked, funny, alert—it’s a lovely, rounded performance. (Later, he tosses off the tough-to-toss-off line, “Guys like me are born loving women like you.”) And he can speak what Mavis won’t speak: “You’re fucking mentally ill” is placed very near her casual admission of defeat, “You wanna get loaded or something?”

Cody recently told the Minneapolis Star Tribune’s Colin Covert, “I’ve dealt with situational depression. I do have an addictive personality. I can be self- destructive. I can be vindictive.” And all that goes into Mavis. Cody’s dialog lacks the hyper-stylized jokey cadences of “Juno,” but Mavis’ knack of eavesdropping in fast-food restaurants on true teens and incorporating their dippy dreams of romance into her latest novel-in-progress seems like Cody’s quiet, witty response to those who say Juno could never, would never speak in that dense motor-mouthed popcult fashion: you want what a real teenage girl talks like? (Gag me with their swoon!)

The film shares Mavis’ disdain for the dinky burg, with Taco Bells and KFCs and “Champion O’Malley’s, where everyone is a winner,” where the epitome of wit is to refer to the big city down south as “the old Minne-apple,” and every table is graced by mass-market salad dressing. (“Don’t open another ranch until the other one’s done!”)

Mavis announces on more than one occasion that she plainly needs help. She murmurs or mouths the word “fuck” an awful lot, and says both “I have depression,” and “I think I’m an alcoholic.” The depressive’s many facets are in plain view, but with her mouth of madness lovingly lipsticked, no one hears her until things come to a terrible boil. “Young Adult” never becomes the kind of French movie where Isabelle Huppert leaves a trail of lipstick and blood, but for Theron, it’s almost “Monster” redux, killer craziness as light entertainment. Can terrible beauty not fall over the edge? The citizens of Mercury will soon learn, wide-eyed, accepting.