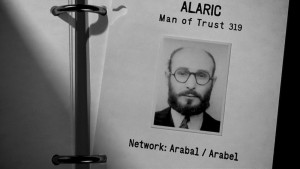 Edmon Roch’s engaging, dramatic documentary “Garbo The Spy” recounts the life of Juan Pujol Garcia, a bourgeois Barcelonan who became one of the leading double agents in World War II, ostensibly working for the Germans but actually in the pay of the Allies, and who set up a network of fictional agents to deceive the Germans about the timing of the landing at Normandy. One of the strategies for conveying the life of a man who was a shadow is to use clips from espionage thrillers, pushing home the idea that a man who was code-named “Garbo” for his performance skills was the equal of the actors on screen. There’s enough story here for a feature edition of “Garbo,” but the mix of Pujol’s web of fictions and fiction-as-propaganda is a witty and provocative idea. Roch’s use of poppish latterday music seems odd at first but suits his busy montage of archive footage, working to defamiliarize familiar black-and-white imagery. “Garbo the Spy” is also fairly heavy on the talking heads. In English, Spanish, Catalan and German. 93m. (Ray Pride)