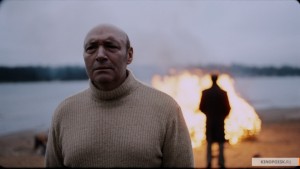 (Ovsyanki)  A journey down highways and rivers and memories, Aleksei Fedorchenko’s near-wordless mood piece, “Silent Souls,” is both blunt and cryptic in its particulars, but filled with striking images, including a typewriter found in silt and ice; the ancient, pagan pre-Russian rituals involved in transporting a man’s dead wife to a funeral pyre; eccentric sexual reveries and the black-blues against white of a very Arctic-looking winter. Novelistic narration from beyond the grave contributes to the film’s quiet, solemn spell. The long takes, stark framing and deliberate pacing won’t be to all tastes, but its rigor may impress others as poetry. With Igor Sergeyev, Viktor Sukhorukov, Yuliya Aug, Yuriy Tsurilo. 75m. (Ray Pride)