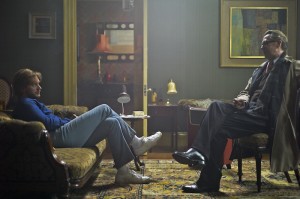 “Tinker Tailor Soldier Spy,” a labyrinthine tale about British espionage and spycraft, is an adaptation of John le Carre’s 1974 novel, from Tomas Alfredson, the director of “Let The Right One In.”

The level of patience and control is similar between the two films: in the superb, measured “Tinker Tailor,” we realize there’s horror inside all of us, the potential for terrible things. George Smiley (Gary Oldman) may not even know it consciously, but he’s just waiting to spring cruelty on someone. After a botched mission, a search for a double-agent in Britain’s MI6 begins: the complex interlocking narratives are enacted by a brilliant, precise Oldman, but also John Hurt, Mark Strong, Ciarán Hinds, Tom Hardy, Benedict Cumberbatch, Simon McBurney, Toby Jones and Colin Firth. “Please don’t shoot the book or remake the TV miniseries [made in 1979 with Alec McGuinness]. They already exist,” Alfredson says Le Carré told him.

Every level of imagery is immaculately imagined, especially Maria Djurkovic’s production design, creating a world the color of whiskey and tea and nicotine—not nostalgic, but muted and drawn—curtains, sheers, windows, dividers, glass: things obscured, things observed in pearly drab. This is the top of spycraft in 1973. But with today’s technology, in everyone’s pocket, everyone’s a spy, everyone’s being spied on. “It’s just not the same world any more, is it?” Oldman tells me. “I mean, could you have a mole, in the same way?”

Alfredson lays it out this way: “If I have a secret, and you know about my secret, and you tell him that you know about my secret, that thing is interesting only if I don’t want you to know that secret. Everyone knows that everything, you could find out anything about anybody. I saw this ad the other day, ‘Protect your emails from someone jail-breaking into your mailbox,’ and I thought, what the hell would people read in my bloody mail. Ordinary conversations with people! It’s not that secret. What’s this big fuss? Why is that important to protect? But the whole Cold War thing was built upon the idea that I have this secret and you shouldn’t know about it, and it escalated to these enormous proportions. Information is something different today. I saw on television right now what’s happening in Syria with people shooting from their mobile phones and sending it directly to CNN.”

“Tinker Tailor” also conveys another dark art, British film acting. Everyone surrounding Smiley, with every little gesture, they’re being perfect spies, too: how much can I hold in reserve, how much can I allow to slip out, how much can I pretend to be someone other? It’s a bold challenge for a director working in a new country in a second language. “It was,” the forty-six-year-old Swedish writer-director says. “It’s quite striking when you come as a foreigner to England because the whole English code, to socialize, is about, ‘Hello! How are you!’ Dut-duh-duh. It’s like a game where everyone is extremely polite, yet protects something. It’s a perfect thing for a Brit. Where I come from, we’re quite stiff, but you can read people more easily. To read that code, for instance, this is a country where homosexuality was forbidden until 1967. It’s a medieval thing if you would think about it today, but it’s quite recent. And of course, that is a perfect soil for those things to grow in. The British invented the whole thing and exported it to the Americans, spycraft, the intelligence service is British-invented.”

“Also,” Oldman adds, “which the film touches on, albeit briefly, there was homosexuality, it was frowned upon, it was illegal, it was like, sodomy was like life in prison. It was rife… and accepted… within the walls. It was the universities. It’s all that, where [one of the spies] says [when caught out], ‘Oh there’s a boy, bung him a few quid.’ I’m not shocked, it’s just all part of the fabric.” 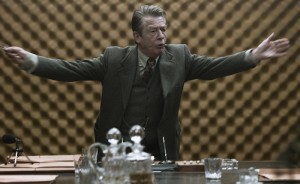 These are all elements of repression, taciturnity. And the film has a lot of men crying. “Yeah, yeah,” Alfredson says. “Four. Four crying men. Yeah. A taboo in those years. In that country. And in that trade. It’s totally taboo to cry. These are the guards of the country, of Queen and Country. We see them cry. It’s quite nice! You could see how fragile they are, and these are sensitive people, and they have to be. If they’re good at what they do, they have to be sensitive. It’s very… double. My girlfriend can say to me, ‘Oh, you’re so sensitive!’ And I can say, ‘Well, if I weren’t sensitive!’—

“‘I wouldn’t be a great director, would I?’ Of course they feel things and get moved. But they live in this imaginary world. They have to relate to stuff they imagine. They imagine this and that happening. They relate to this fantasy world. Worlds! Of course. They are very sensitive people. ”