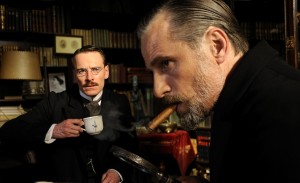 David Cronenberg is a filmmaker who sits in mind as college-professor age, for now, forever, sunk into his quiddities for all time, tending to the postmodern, even if living in our modern age. The weird blankness of the Toronto topography in “Crash” (2004) seems more contemporary than ever; “Videodrome”‘s (1983) pretty much the monster of media stuck in the gut. But, even with an accelerated work pace in the past couple of years, and with still a fistful of projects announced as in development, he is among several masterful filmmakers of a generation of writer-directors in late bloom. Canada’s first-ranking among that perverse country’s perverse auteurs is sixty-eight, while Scorsese is sixty-nine, Herzog is sixty-nine, Wenders, sixty-six. Cronenberg’s “A Dangerous Method” is as lean as his stylized “A History of Violence” (2005), as driven by sharp, telling gestures as “Eastern Promises” (2007), but it’s a period piece! Written by playwright Christopher Hampton! About Freud, Jung! Men with mustaches. Who boat on the lake in Vienna! But it’s about sexual hysteria, disgust for the body and the unknowable unconscious. There we go, David. (Cronenberg’s next, “Cosmopolis,” ought to come off, at least superficially, a little more contemporary: an adaptation of one of Don DeLillo’s least-regarded novellas, starring Robert Pattinson as a callow young billionaire trapped in crosstown New York City traffic as protests erupt in the streets.) There is a history of violence here, too, in the mental-sexual attractions among psychoanalytic pioneers Carl Jung (Michael Fassbender), his mentor, Sigmund Freud (Viggo Mortensen) and a fascinating, fixated new patient, Sabina Spielrein (Keira Knightley). It’s not pure play: the two men’s minds battle to discover what’s really at work in her sexual “hysteria.” (And the jut of her jaw; call it “Naked Bunch.”) Opening in media res to the sounds of a woman screaming in a carriage to ominous strings, the sound of horses cantering and reins and fittings jangling, the costume drama “A Dangerous Method” wastes not a breath. This terse, stately, simmering telling is as Cronenbergian as they come, cool yet fiery, measured in how the camera moves, when the cutting tarries, how conversation and passages of “the talking cure” elaborate on the conversation. The actors are fine; this is classical filmmaking and resonates down the years from its setting. With Vincent Cassel, Sarah Gadon, André Hennicke. 99m. (Ray Pride)