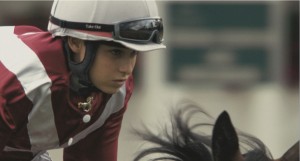 Benjamin Marquet’s 2008 documentary falls neatly between two equine film studies this year, the inspirational “Buck” and the soaring “The War Horse.” (More on this next week.) A study of Steve, Florian and Flavien, three petit fourteen-year-old jockeys and their education at a rudimentary training center for future male and female “Lads & Jockeys” in the village of Chantilly outside Paris, the visual style is observant and straightforward for the most part, with an only slightly insistent score. (The swearing and farting by the boys is altogether apropos, and among the telling details of life among the teens, the smaller the better.) The visual glory comes in extended takes following the horses in thrilling long takes. “This film is dedicated to all apprentices of France,” an end credit offers genially, accompanied by a final peroration on manners, respect and the place of the young jockey in a system that essentially begins and ends with the horse. 100m. (Ray Pride)

“Lads & Jockeys” opens Friday at the Music Box. A trailer is below.