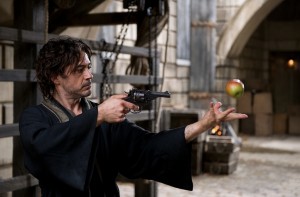 At the end of “Sherlock Holmes” (2009), a mysterious mastermind absconded with a newfangled radio-controlled trigger devised by an occult mastermind from the Temple of Four Orders. In “Sherlock Holmes: A Game of Shadows,” also set in 1891, Professor Moriarty (Jared Harris) emerges from a shadowy tiny part as that absconder. Once again, wily operative Irene Adler (Rachel McAdams) is in his employ, and not long in the arms or handcuffs of detective Sherlock Holmes (Robert Downey Jr.), a character created by Sir Arthur Conan Doyle and dubbed by Downey “an intellectual superhero.” His nemesis here is Moriarty, author of “The Dynamics of an Asteroid” and owner of a little red book of secret bank accounts. This mathematician-cum-mastermind is engineering an international “war on an industrial scale.” Anarchists are recruited. Camouflage suits and plastic surgery figure in a plot that flits around Europe with gypsy-guided border-crossings. Replacing the original screenwriters, Michele Mulroney and Kieran Mulroney maintain the entertaining pace and wordplay of the first film. Carryover details include the opera “Don Giovanni” and veterans of the Afghan war. Director Guy Ritchie, joined by the cinematographer and composer from “Sherlock Holmes,” makes “Sherlock Holmes: A Game of Shadows” a worthy second episode that transcends sequeldom. The deductions are as remarkable as the action sequences. With Jude Law, Kelly Reilly, Noomi Rapace, Stephen Fry, Eddie Marsan, Geraldine James. 129m. (Bill Stamets)