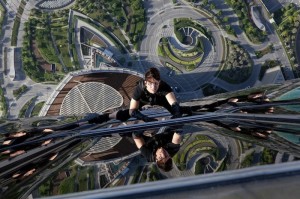 What a generous goof! Contemporary digital-film technology contends that anything is possible: just imagine it, draw it, pre-viz it, throw a few football fields’ worth of computing power in a corporate terabyte farm and it is so! Your millions will come streaming back to you in satisfying increments over the course of your multiyear investment. Too many movies are demonstrating that just isn’t so. Weirdly, all the things that make the motion-capture animation of “The Adventures of Tintin” an almost unwatchable rush of half-baked slapstick and headlong “action,” work in contrary fashion in “Mission: Impossible: Ghost Protocol,” the first feature film directed by animation good-guy Brad Bird. Bird bends the physical world to the needs of the faux-physics of the self-aware decamillion-dollar action movie, working with the weft of spectacle and the possibility of an unlikely, but sudden snuff, but also the weave of kinetic potential of composition as surely as he did in “The Incredibles.” The bursts and spurts of IMAX-framed imagery add to the high-yield yeeeeks factor, especially in the human-fly set-piece alongside the higher floors of the Burj Khalifa in Dubai, the world’s tallest building. It’s nonsensical, sustained fun, and in 3D would induce only spectacular nausea. (The views straight down into downtown Dubai evoke another variation on complex Arabic decorative patterning.) While the secret agents of the IMF aren’t the International Monetary Fund, the second world does offer them incessant challenges. Josh Appelbaum and André Nemec’s script works as much as comedy as thriller, with details and jokes foreshadowed and neatly paid off throughout, with as many rhymes as Mother Goose. With his odometer needle cresting right upside of fifty, Cruise is Cruise, but more manic, more chiseled, seeming to be running away from that unseen enemy called Time rather than the fleet Russian with a valise filled with nuclear launch codes. Bird’s less than adept at keeping the ensemble on the same patch of stylization: Jeremy Renner has a bleat of exposition that is al dente in both word and pitch. As the requisite computer adept—Have MacBook Air, will travel—Simon Pegg gawps gamely, if a little too much like Don Knotts, and Paula Patton’s most striking moments are when she’s been instructed to kick off whatever shoes she’s got on and play yet one more scene barelegged and barefoot. (Mr. Bird, meet Mr. Soderbergh. You have interests you may want to compare.) The zooming score by Michael Giacchino (“Ratatouille,” “Lost,” “Super 8”) manages to pastiche in one brief fluent rush strains of Maurice Jarre’s “Lawrence of Arabia,” Lalo Schifrin’s original “Mission: Impossible” theme and a tincture of John Barry’s Bond work. Even at his giddiest, he is not kidding around. Bird’s collaborators are topnotch, including veteran editor Paul Hirsch (“Star Wars,” “Source Code”) and Robert Elswit (who shoots for Paul Thomas Anderson, David Mamet and George Clooney, among others). In a range of minimalist frames, the ones that aren’t stuffed with CGI-etched goodies, Elswit’s substantial, yet often unshowy geometric gift is in evidence. Then the movie accelerates again, as with the old Encroaching Haboob Trick (a sandstorm that will not stop).  Potentially loopy lines like “I’ll see you in Kandahar,” “I would like to show you my collection of art” and “I look to Hiroshima, Nagasaki… Nuclear war may have a place in the natural order.” My favorite cameos: the Secretary the crew reports to, and a BMW in Mumbai is a cousin to the red car in “Minority Report.” If you want to spend the extra money, IMAX is the way to go. 130m. (Ray Pride)